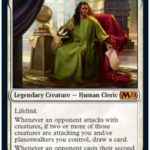 A legendary creature cycle in Core Set 2021 pays homage to powerful spellcasters from the plane of Dominaria.

Teferi is the face and feature planeswalker of the M21 set. Paying tribute to the philosopher and scientist, Wizards of the Coast created a cycle of legendary spellcasters who have ties to Teferi and the plane of Dominaria.

The five colors in Magic are each represented via cards that are of either Rare or Mythic Rare rarity. All of the cards are new and, as an added bonus, Teferi’s daughter was also printed in UW.

Prior to ever meeting Teferi, Mangara witnessed the aftermath of a Teferi experiment in Jamuraa. The event connected Mangara with Jolrael and Kaervek, which eventually led to him meeting Teferi.

A diplomat at heart, Mangara, the Diplomat is a fitting card in the M21 set because he creates card draw via his abilities. He also has Lifelink and is a human cleric.

Co-founder of the Tolarian Academy with the planeswalker Urza, Barrin recruited Teferi as a student to defeat the Phyrexian invaders. His abilities in M21 allow him to return a target planeswalker or creature to hand when he enters the battlefield. And at the beginning of his controller’s end step, if a permanent was put into their hand, he draws a card.

Tied directly to Mangara, having trapped him in an Amber Prison after convincing Jolrael that the diplomat was attempting to take Jamuraa. But in reality, Kaervek wanted to control Jamuraa. The tables were eventually turned on Kaervek once Teferi returned and Jolrael discovered the truth. And karma had its way with Kaervek getting locked in the Amber Prison instead.

Tired of humans, Jolrael retreated to the Mwonvuli Jungle to live in peace prior to Teferi’s experiment gone wrong that attracted Mangara and Kaervek. She’s one of the oldest Zhalfirins and was manipulated by Kaervek during the Mirage Wars. A lover of animals over humans, her M21 card features weaker abilities normally associated with the color Green and druid.

Capturing the heart of Terferi, Subira was a caravan traveler who married the planeswalker. Her love for travel kept her away most of the time, but the two were still in love and had a child together. Her M21 card is in Red, featuring two solid abilities and Haste.

Niambi is the daughter of Teferi and Subira. She isn’t in the legendary spellcaster cycle within the M21 set, but she’s still a new legendary multicolored creature in Magic. Featured in UW, like her father, Niambi has Flash along with two solid abilities.

The legendary spellcaster cycle and all of the M21 cards will release digitally on June 26 and via tabletop on July 3.