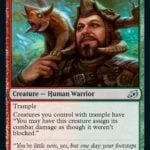 Ikoria: Lair of Behemoths is locked and loaded for this coming season in Magic Arena draft. And with player draft launching with it, there’s never been a better time to study up on this set’s hits and misses.

Here’s our ranking of Ikoria‘s Gold and colorless commons and uncommons.

This beastie packs a lot of power under the hood. It’ll replace itself every time it mutates, which undoes a lot of the risk that stacking creatures on top of each other presents. So go ahead and load up on this Gnarr if you’re on the right colors—just avoid making some sort of silly trumpeting sound when you play it.

Now here’s some serious value. Six mana is steep, but this instant packs a serious punch and then some. Getting your best dead creature back is always a good time, but getting an extra fight in makes this a power move. Pair it with something big that is easy to put in the grave, like Greater Sandwurm.

Lore Drakkis brings a relatively common ability to the mutate world and does it at a reasonable cost. For just two mana, you can mutate this onto one of your other creatures, getting back a useful spell. Being able to recur this gives it a high ranking as well since the right deck will certainly abuse this on successive turns.

Farfinder is the best fixing in Ikoria limited, hands down. It’s colorless and it gets you any color you need for the turns that it matters. With so many gold rares in this set, we feel this is a high draft pick for the right decks. As a plus, vigilance makes this a reasonable mutate target.

On curve, this is a great way to set up your airforce. Skybonder’s ability to tax opponent removal is fantastic and you’ll want to deploy this before your bigger fliers, like Dreamtail Heron. This puts your opponent in a pickle. Do they remove the Skybonder to eliminate the tax or tap out to remove the Heron and have shields down for the followup threat? Either way, you win.

Anguished Unmaking called and wants its rarity dropped. For one less mana, this still hits creatures but maybe has no life loss? At uncommon, it’s hard to find better removal than this full stop. If you’re in the Humans deck, this is a must-draft.

Boneyard Lurker is a decent creature with a powerful ability. Returning any kind of permanent is great flexibility and it can definitely help set up for the mid-game grind-fest that Golgari decks are known for.

Here’s another great mutate creature with a gold border. Necropanther may have more restrictions than Lurker above, but returning things directly to the battlefield can be back-breaking.

The ally-colored bonder cycle is a powerful one and Sonorous Howlbonder can make your menace creatures nearly unblockable. Either your opponent commits all their creatures to defense or you’ll be able to swing away for the win. The abundance of deathtouch in black makes this all the better.

Well, it’s hard to beat Howlbonder above that makes things hard to block, but Wizards gave the goose away with this one. Wildbonder is insane and can basically end the game on the spot if you set the board up right. “Ooops, All Trample” is definitely an archetype in Ikoria Limited and this is the all-star in the deck that allows all your tramplers to just win.

By our count, this is in the top 10 cards in the set—including rares. Draft this and be proud, you monster.