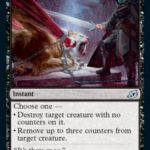 Ikoria: Lair of Behemoths officially dropped today in Magic Arena. With player draft also launching alongside the new set, it’s the perfect time to take a look at the upcoming cards.

Here’s our rankings of the Ikoria’s Black commons and uncommons.

This snake is definitely going to be a nightmare for your opponent to deal with. By dropping down early, you can be certain to rule the first few turns of the game by threatening to kill something for free with a mutate. It may not pull its weight in the late game, but for a single mana, this is hard to pass up.

Lurking Deadeye is in the right place for a faux-removal spell. With flash, you can cast it to easily block and kill something of your opponent’s. But where this really shines is if you can set up a two-for-one by dealing something else damage beforehand. Porcuparrot comes to mind as an ideal companion.

There’s something to be said about efficiency. Bushmeat Poacher is basically the most efficient way to kill your own creatures in the business. Compare this to something like Soulreaper of Mogis from Theros: Beyond Death and it’s easy to see why.

Hey, it’s another flash creature for Black at common. This plays a similar role to Deadeye Lurker but has a little more flexibility and a lot more finishing power. Removing counters seems powerful in the coming months.

A 4/4 creature with Menace can be hard to deal with and this one has serious upside with its mutate trigger. Pair this guy with a flash mutater and you likely have one of the strongest Limited plays at the table.

Here’s another creature that cycles and leaves a keyword counter behind. This one gets a prime spot due to the brutality of putting deathtouch on something with a lot of toughness, like Gloom Pangolin. It’s also an 8/8 if you can hard-cast it. This beastie is going to kill a lot of things.

For just three mana, you can get a lot of upside with this creature. Cater the counters it gets to the board situation. All three have different uses but should at least draw out removal from your opponent. This also looks great for a mutate target since the counters stick around.

I’m not sure common instant speed removal in Black gets any better than this. Unconditional destruction paired with giving one of your own creatures menace—there’s no downside to be found here. Draft as many as you can and make no apologies as you snuff out your opponent’s best creatures.

This card seems insane. For just three mana, you get two creatures from the graveyard? And they get some keyword counters? I don’t even know where to start but this is all I want to do. It pairs up nicely with Grimdancer to give all three keyword counters.

Heartless Act is everything you want in instant-speed removal. It’s flexible, cheap, and often will trade up for your opponent’s best creature. Removing counters at instant speed can do a lot in terms of altering combat math—or just outright kill a baddie.