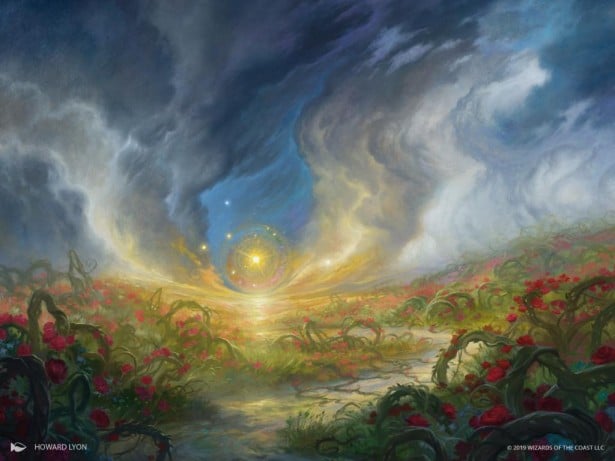 Syr Konrad, the Grim plans to capitalize on graveyard tactics in Magic: The Gathering while incorporating the Throne of Eldraine fairy tale theme.

Syr is a legendary Uncommon focusing on Mono-Black spoilers within the Throne of Eldraine (ELD) set releasing on Oct. 4. Black is known for capitalizing on graveyard tactics, along with sacrificing creatures to gain an advantage.

The design of Syr Konrad, the Grim plays off a royal theme of knights within ELD that’s being featured in every color, according to Magic designer Gavin Verhey.

“Every color in Eldraine has its own royal court of knights” Verhey told IGN. “We wanted to make sure there were plenty of cool, monocolor legendary knights running around—and so we made Syr Konrad to make sure black had one at uncommon.”

Costing five mana (two black), Syr Konrad, the Grim isn’t a cheap legendary card. As a five/four, its value isn’t great but the static ability triggers attached to Syr Konrad are. When used with cards like Bone Splinters and Dreadmalkin, Mono-Black decks gain the advantage of non-combat damage while capitalizing on removal and counters to beef up cheap creatures on the battlefield.

The combo potential found with Teysa Karlov in Orzhov decks takes Syr Konrad, the Grim to additional heights, causing the one damage to trigger an additional time.

And let’s not forget the potential Syr Konrad, the Grim has in Commander and the upcoming Brawl format to MTG Arena. As a legendary creature, Syr Konrad is an ideal commander.

Throne of Eldraine releases on Oct. 4 with a pre-release event taking place from Sept. 27 to 29. Players on MTG Arena and MTGO will have access to the set on Sept. 27.