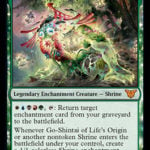 A total of eight Magic: The Gathering Commander only cards will appear within Kamigawa: Neon Dynasty set booster packs, containing Shrine lord that supports all five colors and a cycle of new Myojin spirits on the plane.

There are a total of five Myojin Commander-only cards, each representing one of the five Magic colors. The Myojin are all legendary spirits that are new to the plane of Kamigawa and are not tied to the original Myojin from the past. Each enters the battlefield with an Indestructible counter when cast from hand, as these legendary spirits will not gain the counter when cast from the Command Zone. And each has a total CMC of eight.

The legendary dog Yoshimaru, Ever Faithful pays tribune to the original good dog, Hachikō, as he waits patiently for his emperor to return.

Players can check out all eight Commander-only NEO cards found in set booster packs when the set globally launches for tabletop on Feb. 18.

Update Feb. 12 at 10am CT: Updated to include that the eight NEO Commander-only cards may appear in Collector boosters as well with extended art.