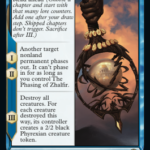 Sagas are returning in Magic: The Gathering’s new set Dominaria United with an entirely new twist on the well-received card type.

Sagas returned in Kamigawa: Neon Dynasty with a twist on the card type having them turn into an Enchantment Creature on the third chapter. In Dominaria United, Sagas have the ability Read Ahead. Sagas with this ability allow the player to start a saga with any number of lore counters. The Saga still gets a counter after your draw step and is sacrificed after the last chapter.

This means sagas can enter the battlefield on the second or third chapters without having to wait to get the benefits. Two of the saga cards revealed during the first day of Dominaria United preview season show that it’s not always the right choice to jump straight to the final chapter.

If you decide to jump immediately to the third chapter, The World Spell can slam two large threats onto the battlefield. This turns the spell into a quick way to close out the game. It might be more worth it to let the Saga play out starting on the first chapter. It will help you find two cards to play with the third chapter’s ability.

The versatility is great. It gives the players more options, something that Magic design has been leaning into more since the release of Dominaria in 2018.

The Phasing of Zhalfir

This is an interesting Blue board wipe for four mana. It can be used immediately to destroy all creatures and replace them with 2/2 tokens. It can enter on the first and second chapters to phase out a creature before the bass destruction.

Aside from protecting your creatures before the board is wiped, the first two chapters can be used to clear the way for your own attacking creatures. Cards like Slip Out the Back from Streets of New Capenna are generally used to phase out your own creature but in specific situations can be used to phase out the opponent’s blockers. The same application will apply to The Phasing of Zhalfir.