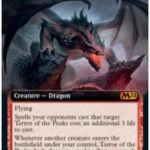 Multiple Magic: The Gathering cards from Core Set 2021 have maintained and increased their value over time, from booster fun variations to regular versions.

Released on July 3, 2020, Core Set 2021 contained a total of 278 regular cards. Cycles within the set included Shrines and tribal lords, along with five planeswalkers. Upon rotating out of the Standard format, several M21 cards increased in value due to gameplay in formats like Pioneer, Commander, and Modern. Booster fun variations within the MTG set included extended art, borderless, and Showcase.

From dragons to diplomats, here are the M21 cards still worth money, according to MTGGoldfish and MTGStocks.

Terror of the Peaks

Terror of the Peaks found a home in the Standard format via 4C Omnath and continues to get played in the Commander format. The dragon dominates the M21 cards worth money, having an extended-art foil version that is valued at around $82. The non-foil extended version is worth around $45, along with the prerelease foil promo version. And the regular Terror of the Peaks card is priced at around $22.

See Terror of The Peaks on Amazon

Printed in Fate Reforged, War of the Spark Masterpieces, and M21, Ugin, the Spirit Dragon remains a valuable MTG legendary planeswalker. The dragon’s WAR Masterpieces extended art is valued at over $100 at around $114, while the M21 foil extended-art version is worth around $65. Ugin’s Showcase version is worth around $48 and the prerelease foil promo is priced at $40. The regular version of Ugin, the Spirit Dragon is valued at around $23.

Chromatic Orrery was a suspected sleeper within the M21 set. As a colorless Artifact that has a CMC of seven, it can add mana of any color once on the battlefield. And for an additional mana ability, it can draw a card for each color among permanents that the player controls.

A reprint of Grim Tutor lowered its Starter 1999 price from around $200 to about $87. The M21 borderless foil version is valued at around $28 while other versions are worth around $20. The regular Grim Tutor version is priced at $17.