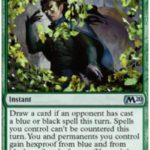 Despite a lack of booster fun variations, several Core Set 2020 cards are still worth money in Magic: The Gathering, years after the set’s release.

A majority of Core Set 2020 (M20) regular card versions fell under $15 with the release of Throne of Eldraine (ELD) and remained that way until the set rotated out of the Standard format. An increase of players within Commander and other casual formats like Cube has helped a variety of M20 cards retain their value.

From an elemental horror to the legendary vampire planeswalker on Innistrad, here are the M20 cards still worth money, according to MTGGoldfish and MTGStocks.

Once the lord of Orzhov Vampires prior to the 2019 Standard rotation, Sorin has maintained his value via the Commander format. The legendary planeswalker has a prerelease promo foil version worth around $42. Sorin’s planeswalker stamp foil and regular foil version are worth around $35 to $40. And the regular version of Sorin, Imperious Bloodlord is valued at around $29.

Reprinted in the Innistrad: Midnight Hunt set, the value of Field of the Dead dropped slightly. The popular MTG land has a foil version worth around $40 and its prerelease foil version is valued at around $34. Other versions, including the regular Field of the Dead, are priced between $20 and $30.

Played in multiple MTG formats like Commander, Legacy, Modern, and Vintage, Elvish Reclaimer is a one-drop that has multiple foil versions worth between $20 and $30. And the regular version of the elf warrior is priced at around $10.

Ajani, Strength of the Pride

Chandra, Awakened Inferno is a beast of a planeswalker that’s maintained value over the course of the last three years since M20 was released. The fiery planeswalker has a foil and prerelease promo foil version worth around $20. And Chandra’s regular version is priced at around $13.

Update April 29 at 8pm CT: All M20 entries were updated following the release of Streets of New Capenna.