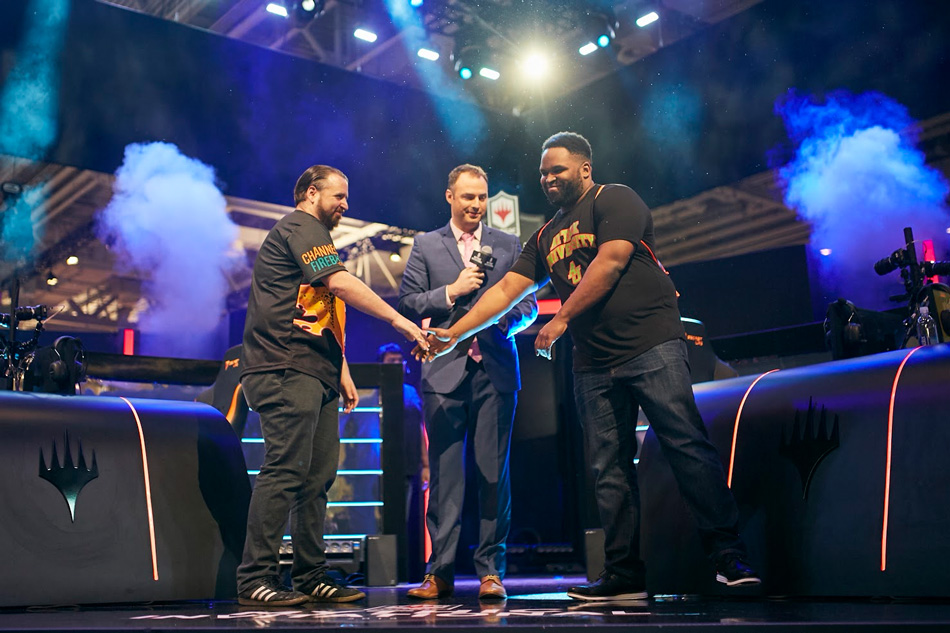 Image via Magic Esports Wizards of the Coast

Cedric Phillips is a voice Magic: The Gathering fans are familiar with. Whether it’s on official Wizards of the Coast broadcasts or the Star City Games Tour, Phillips is cemented as one of the most recognizable figures in competitive Magic.

This weekend, at the Zendikar Rising Championship, Phillips finds himself playing in the kind of tournament he’s lent his voice to for so many years. Phillips is an accomplished competitor in his own right. But as his priorities shifted to casting in 2012, his focus on the competitive grind waned.

During his prime competitive years in the 2000s, Phillips earned two Grand Prix top-eight finishes and a Pro Tour top-eight placing. Phillips said with the amount of time he dedicated to Magic during his college years, he essentially majored in Magic. If Phillips got his bachelor’s in Magic, the commentary was a skillset refined in graduate school. For Phillips, the experience of playing and casting at a high level improved his knowledge of the game.

“I’ve played at an extremely, extremely high level for a really long time,” Phillips told Dot Esports. “And then I stepped away from doing that to do coverage which gives you a different view of the game. I’m actually learning from the players playing at the highest of levels. I’m qualified for a tournament that I care about. Now I kind of get to put all of that education together and see what I can do with it.”

Phillips qualified for the Zendikar Rising Championship by winning the Pioneer Super Qualifier on Oct. 31 with Boros Wizards. He didn’t come into 2020 thinking about preparing for one of the biggest Magic Standard and Historic tournaments of the year, though. When Phillips qualified and learned he wasn’t on the coverage team this weekend, it became clear that he had an opportunity to play at the highest level once again.

“If I’m qualified, I might as well try. Because I’m not on the road nearly as much as I normally am for commentary or other work functions, it’s like, ‘OK, let’s put in two or three solid weeks and see what we can do,’” Phillips said.

The past few weeks were a throwback for Phillips, who tested for nearly eight hours a day, much of which was broadcast on his Twitch stream. He also enlisted the help of Andrea Mengucci and Brad Nelson as a part of his testing team. With two formats to prepare for, Phillips focused heavily on Historic. Like many pros in the MPL and Rivals League, Phillips is familiar with the Standard metagame as a part of the coverage team for League Weekends. Historic leaves many pros, including Phillips, with a lot of questions to answer, however.

He landed on Four-Color Midrange in Historic, which is the most-played deck at the Zendikar Rising Championship making up 20 percent of the metagame, according to Magic.gg. For Phillips, the decision came down to simply playing the best cards in the format. Uro, Titan of Nature’s Wrath, Thoughtsieze, and Nissa, Who Shakes the World give the deck firepower and resilience.

Phillips went with Mono-Green Food for the Standard portion of the tournament. This deck didn’t dominate the split’s League Weekends, but consistent results elevated the deck to 17 percent of the Standard metagame at the Zendikar Rising Championship. Phillips said he wished he gave Standard more time during his testing period because of how complex the matchups are. But this week gave Phillips the time to fully understand Mono-Green Food and the plethora of microdecisions that occur in a game.

“Once your decklist is submitted, you can’t worry about so much because there is no do-over,” Phillips said. “It’s an opportunity to just learn and maybe learn some intricacies that I hadn’t realized initially.”

The veteran caster and player said he enjoyed the opportunity to be able to test with the intensity of his younger years. As with any older athlete, Phillips is leaning on experience and maturity to make up for any sharpness lost with age.

“I’m not mentally sharp now as I was in my 20s with regards to noticing everything,” Phillips said. “Now I have to slow down and think a little bit more. I think as you get older you learn better ways to think about things and find better mental shortcuts instead of it just automatically coming to you. You have to work a little harder, but you’re better at working a little bit smarter.”

You can watch the Zendikar Rising Championship from Dec. 4 to 6 on the Magic Twitch channel.