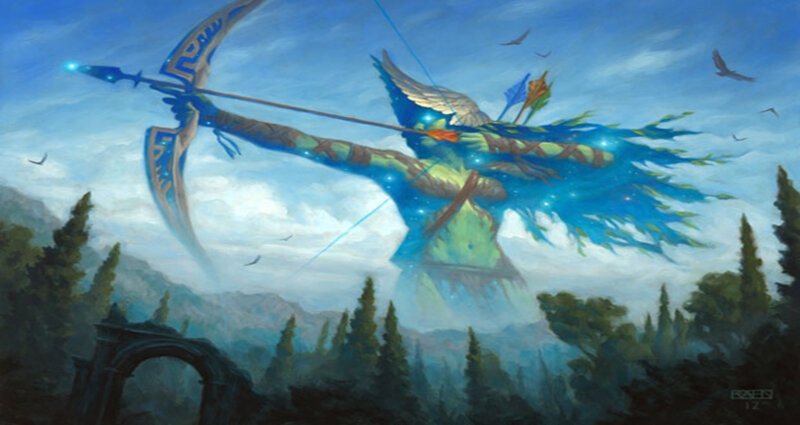 Limited Sealed and Draft are almost upon us with the release of Magic: The Gathering’s newest set, Theros: Beyond Death.

A total of 254 cards are in the Theros: Beyond Death (THB) set, which releases digitally on Jan. 16. The set’s pre-release weekend will follow on Jan. 17 to 19. The THB set was designed to promote Monocolored builds but also works with two-color decks as well. Going three colors in Limited, unless splashing something specific, might be a reach.

Green in THB is loaded with enchantments. These cards can include creatures, and they tend to synergize off one another to produce some powerful effects.

The following list of best and worst Green cards to play in the MTG Limited format is broken down according to rarity, from Common to Mythic Rare. And as a disclaimer, ratings for these cards are subjective and are based upon first impressions before actually being played.

Green in THB has a total of 19 Commons and a majority of them are sideboard cards that are too niche for main deck play. There are a few honorable mentions worth covering, though.

Moss Viper is a one-drop with deathtouch, a worthy defender at any point during a match, and Ilysian Caryatid is a two-drop with mana fixing. Voracious Typhoon is another Common worth noting as its a four-drop that’s a 4/4. It also has two pips for Devotion and can return utilizing Escape with three +1/+1 counters on it.

Loathsome Chimer is a three-drop 4/1 that can block large attackers and has a decent Escape cost that returns it with a +1/+1 counter.

Omen of the Hunt (best)

With a CMC of three, Omen of the Hunt is slightly on the pricey side. But it provides ramp and mana fixing, along with being able to Scry two when sacrificed. Omen of the Hunt also has Flash, and it sacrifices itself to Scry at instant speed.

Not all reprints are worth top picks, but in THB, Return to Nature is a solid removal card worth grabbing. It deals with Gods, Sagas, and pesky creatures with Escape in the graveyard. And it also deals with annoying equipment, along with Thundering Chariot.

There are 13 Uncommon THB cards in Green. And several of them are worth mentioning even if they aren’t the best.

Destiny Spinner isn’t a top pick but it’s worth grabbing because Blue is quite powerful in the THB Limited format. And she has late-game upside and is a 2/3 who’s a two-drop.  Hydra’s Growth is also worthy because it can quickly power up a strong creature or draft chaff, which then forces an opponent to use a removal card saved for one of your stronger creatures.

Another Uncommon that shouldn’t be ignored is Nessian Wanderer. It’s a two-drop that finds lands that’s a 1/3. Worst case scenario, you find two lands with Nessian Wanderer which still makes it a solid pick. And Nessian Hornbeetle is a solid two-drop with upside if it stays on the board. Setessan Petitioner is also a solid card in a build that depends upon Devotion, and as an upside, she provides lifegain.

Drafting a 4/4 with a CMC of six may seem rough, but Pheres-Band Brawler makes up for its casting cost in that it acts as removal too. It takes out the annoying power of three creatures and can trade with a four that may be eating away at your life total.

Mystic Repeal is likely one of the best removals in the THB set. It bumps a God and a variety of other cards at a cost of one mana. Don’t settle for one Mystic Repeal in a Booster Draft, grab a couple if you can.

Renata Called to the Hunt (best)

Renata Called to the Hunt is a solid four-drop who pumps up your other creatures when they enter the battlefield. Worst case scenario, she’s a 2/3 on turn four who pumps a turn-five creature.

The worst Uncommon Green THB cards are Klothys’s Design and The Binding of the Titans. Klothys’s Design has potential as a late-game finisher, but it lacks any form of evasion. Without trample, or even flying, this pump-up-your-creatures-for-a-turn card isn’t as powerful as it might seem.

Rare and Mythic Rare cards in Limited are typically self-explanatory and are worth picking up. But not every Rare or Mythic Rare is a bomb. And in the THB set, there are a total of 11 Mythic Rare and Rare Green cards.

In Green, there are a few Rare honorable mentions worth noting. Arasta of the Endless Web is a four mana 3/5 with Reach who produces tokens with Reach when an opponent casts a Sorcery or Instant spell. There’s also Ironscale Hydra who’s a five mana 5/5 that can grow when defending creatures with a power of four or less.

Gods are worth a top pick, especially Nylea, Keen-Eyed, who reduces the cost of every creature by one. Once becoming a creature, Nylea is a 5/6. And as an added benefit, she can search your library for creatures when you need them most and fuel the THB Escape mechanic with non-creatures put into the graveyard.