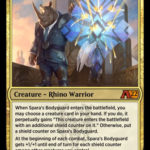 Alchemy: New Capenna will drop 30 new digital-only cards in Magic Arena‘s exclusive formats Historic and Alchemy on June 2. The game’s third alchemy set is a continuation of Magic‘s experiment with designing cards that could only work with the digital design space Arena enables. Every card in Alchemy: New Capenna is legal is Alchemy, Historic, and Historic Brawl.

A special draft queue will also be included with the release of Alchemy: New Capenna. One Common in each pack will be replaced with a card from the 30-card Alchemy release. It’s the first time Magic will use digital-only cards in Draft.

The third day of Alchemy: New Capenna spoilers featured a handful of spells using the digital keyword Perpetual. These cards apply persistent abilities to cards that remain on them as they move between zones.

This is a solid Creature to include in a deck centered around cards like Falco Spara, Pactweaver, and Sanctum Warden. There’s enough support for a good G/W/U counters deck that the archetype could show up in Alchemy more thanks to Spara’s Bodyguard.

Arming Gala is a great Enchantment that should be played in both Alchemy and Historic. This gives every Creature you own regardless of what zone it’s in +1/+1 every turn. The turn it comes it’ll trigger on the end step. Even if you can’t untap with it, it already applied a +1/+1 buff to everything. That’s not bad for five mana.

If Arming Gala is allowed to sit on the battlefield it’ll eventually snowball hard. It’ll eventually make every Creature you own a massive threat, whether it’s a measly Llanowar Elves or a huge Workshop Warchief.

Streets of New Capenna brought a lot of treasure payoffs and enablers to Arena‘s formats. Racketeer Boss is a strong two-drop with a nice 3/2 body. It gives two Creatures in your hand the ability to create a treasure token when cast.

This is a nice way to ramp into larger spells and fix your colors. It also saves you some mana on the backend by refunding one mana because of the treasure. Racketeer Boss should fit in with Prosperous Innkeeper at the two-mana slot of R/G/X treasure decks.

There is some potential Racketeer Boss will show up in Gruul Aggro lists in Standard. The treasure tokens let you curve out and flood the battlefield with more hasty threats.

Four mana is a lot to ask in a mono-blue tempo build for a 2/3 without evasion. If Nightclub Bouncer sees play it’ll be based on the strength of its bounce ability. Bouncing any non-land permanent and applying a tax is a great way to slow the opponent down.

The abilities stack so multiple Nightclub Bouncers can apply an increasing tax on a problematic non-land permanent the opponent keeps trying to replay.

Rogue Tribal in Alchemy still has some pieces from Zendikar Rising alongside solid tempo spells that are found in the fringe Mono-Blue Delver build. Nightclub Bouncer might be a key piece that brings back the disruptive tribal archetype.