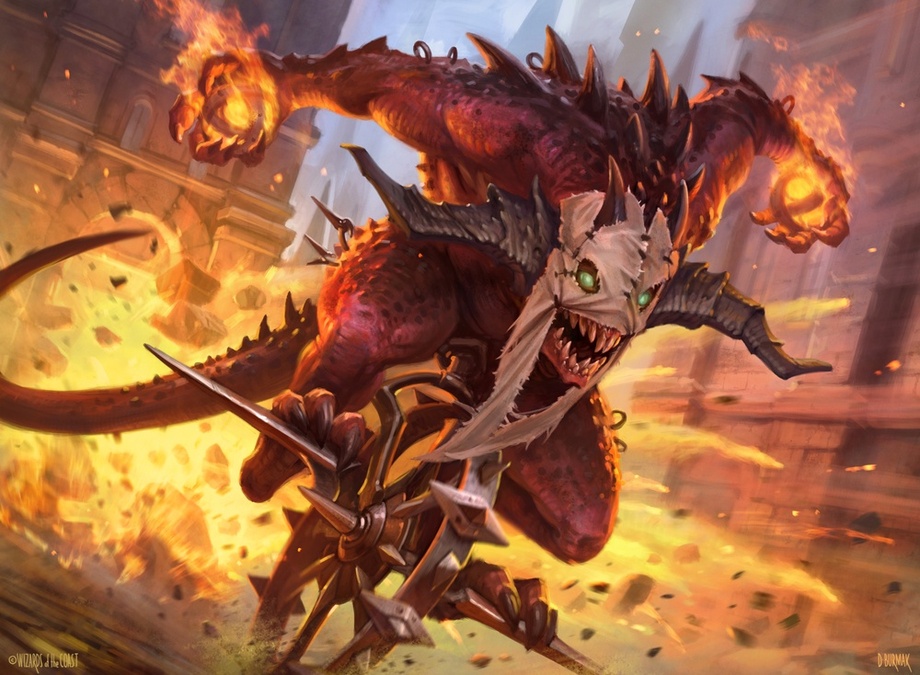 Seven rounds of Historic action went down today during day one of the 2020 Mythic Invitational and all eyes were on Mono-Red Goblins and how its key card, Muxus, Goblin Grandee, could be stopped.

In the first major Magic esports Historic tournament, the key battle is Goblins versus Sultai Midrange. The two most popular decks in the tournament had strong showings, as many expected. Goblins impressed throughout the tournament with its ridiculous early-game power being supported by a strong mid-to-late game, showing that Goblins is more than just a Muxus combo deck. Out of the 10 players that went 6-1 or better here is the deck breakdown.

Here are the standings at the end of day one.

Luis Salvatto was a star on the first day. He was the first person to play Rakdos Arcanist on the main broadcast. In game one Salvatto stole the game from Isaak Krut after nailing three Kroxa, Titan of Death’s Hunger triggers in a row to close out the game. The second game was a much cleaner victory with Salvatto leveraging Dreadhorde Arcanist to get value out of his graveyard and takedown Krut. He also defeated Brad Nelson on stream with relative ease. “Rakdos has the best game one in the format…people lost some attention on Rakdos,” Salvatto said during a postgame interview on stream.

In the final round, he faced Ivan Floch, the only other undefeated player in the tournament at the time. Salvatto struggled in game one to get anything going and went down 0-1 in the series against Floch’s Jund Sacrifice deck.

After a wild late-game rally by Salvatto in game two the series was tied going into match point. Game three was typical of this matchup with both sides trying to eek out value plays. It was Floch with the Mayhem Devils triggers that pushed him to earn a victory and finish the day undefeated at 7-0, though.

“It feels good. I’m glad I can do well again in Magic. I’m just happy to continue on the path. It was close and intense. I tried to navigate it as well as I could.” Floch said during a postgame interview.

Luis Scott-Vargas found success with his Jund Sacrifice list, or as Scott-Vargas puts it, “Rakdos with four Collected Companies.” In his feature match of the day he faced Peter Yeh and his Sultai Midrange deck. In the supremely grindy matchup, Scott-Vargas was able to find more consistent value, even after having mana troubles early, to take the series 2-0. Before nailing the match-winning blow with Korvold, Fae-Cursed King, Scott-Vargas had to bust out a victory burrito.

He returned later in the day to face William Jensen and his mono-red Goblins deck. Scott-Vargas dominated game one forcing a concede off a quick Mayhem Devils and Cat Oven combo. Jensen managed to push Scott-Vargas a little in game two with a strong Muxus trigger, but Scott-Vargas found two Mayhem Devils off a Collected Company which led him to a quick 2-0 series victory.

In another featured matchup, Magic Pro League member Brad Nelson brought his Sultai Midrange deck to battle Luis-Samuel Deltour’s Rakdos Goblins list. Coverage joined the match with both players tied 1-1. Nelson spent the game desperately trying to prevent Deltour from casting Muxus. An Eliminate and Extinction Event couldn’t prevent Muxus from entering the board early. When Deltour’s Muxus whiffed, only finding a Conspicuous Snoop and Wily Goblin, Nelson topdecked Witch’s Vengeance and cleared the board for the victory. Nelson took the series 2-1.

Theo Moutier vs. Seth Manfield was another staple matchup of Goblins versus Sultai Midrange. Despite Manfield taking the 2-1 victory, most people are talking about an unfortunate pop-up that made its way onto the broadcast. This incident had many fans calling for Wizards of the Coast to finally create a spectator mode in the Arena client. Day one was marred by some early technical issues that caused stream stuttering.

The action continues tomorrow with day two of the Mythic Invitational on the Magic Twitch channel beginning at 11am CT.