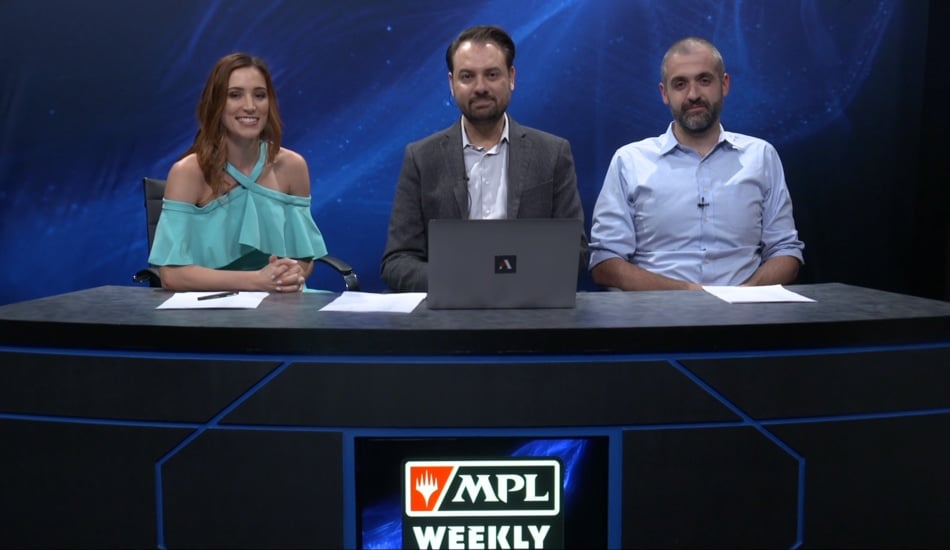 Week one of the MPL Throne of Eldraine split playoffs features four top Magic: The Gathering players competing for Mythic Points and a day-one bye to Mythic Championship VII.

Sitting in the upper bracket with an advantage in the playoffs is Rei Sato with a Bant Golos deck and Jessica Estephan playing Bant Food. In the lower bracket, it’s Reid Duke and his GW Adventure deck facing off against Piotr “Kanister” Głogowski who’s playing Golgari Adventure.

As the matches are played via live stream on the Magic Twitch channel, results from those matches will be posted below.

Game one of the best-of-three match between Sato and Estephan goes to Jessica and her Bant Food deck. Suffering from a lack of mana during the first few plays Estephan fired off Oko, Thief of Crowns and Nissa, Who Shakes the World onto the board, beating Sato down quickly before Field of the Dead could take off.

Game two seemed to favor Estephan early, stealing the Golos, Tireless Pilgrim from Sato with Oko’s minus five ability. But Sato wasn’t going down without a fight, producing four 2/2 zombie tokens with Field of the Dead and then stealing back Golos with Teferi, Time Raveler’s minus three ability.

Estephan also refused to give up despite falling behind in the match. Gaining the advantage once again through Questing Beast after a board wipe, Sato couldn’t regain the board state. Going 2-0 in the upper finals, Estephan advances to the final match of the MPL Sapphire Division playoffs ELD split.

Game one of the best-of-three match between Duke and Kanister kicked off as Reid quickly went wide with Lovestruck Beast tokens and Venerated Loxodon. Kanister answered Duke’s strategy in true Golgari fashion, casting the dreaded Rankle, Master of Pranks and Murderous Rider.

At first, it wasn’t enough, but then Kanister top-decks Questing Beast. Duke, however, had the answer to the beast with Giant Killer in his hand. Both players squared off with Kanister at one life and Duke at seven, restacking the board on either side. Duke went all-in with lethal, but it wasn’t so deadly—since Kanister had an Assassin’s Trophy in his hand. And with that, Kanister won game one.

Kanister kept the momentum going in game two, removing one creature after another of Duke’s as he mismatched on lands with too many White and not enough Green.

Rankle was cast again, keeping Duke slightly behind on the board state with one Veil of Summer left in his hand. And then he casted Questing Beast the next turn, winning game two and taking the series 2-0.

Next up is the semifinals with Kanister and Golgari Adventures going up against Sato and Bant Golos.

In a poor matchup between Bant Golos and Golgari Adventure, Sato began game one by ramping up his lands quickly with a Field of the Dead already in play. And he continued to thump on Kanister, drawing a Once Upon a Time to locate an additional Field of the Dead on the battlefield followed by an Agent of Treachery to steal Kanister’s Lovestruck Beast.

Kanister answered the onslaught with Massacre Girl, wiping the board clean. But Sato still had three Field of Dead on the battlefield and finished off the game with another Agent of Treachery, dealing lethal to Kanister.

Game two kicked off with Kanister playing Ashiok, Dream Render, (preventing search) while having Questing Beast and Rankle in hand. Sato, on the other hand, had Field of the Dead but lacked ramp. Kanister took advantage of the board state, bringing Sato down to six life. But Sato had Time Wipe to clear the board and prevent lethal.

Kanister recovered quickly, casting Questing Beast. But Sato struck gold by top-decking an Agent of Treachery to steal the beast with only two life left compared to Kanister’s 15. It looked like Sato had the advantage but Kanister played Rankle and it was “good game.”

Kanister and Sato began game three on equal ground. Kanister gains the advantage with two Edgewall Innkeeper’s on the battlefield while Sato tried to find answers. Kanister continued to go wide, breaking Sato down until he was forced to concede. Kanister won game three and moved on to the finals against Estephan.

The finals in the MPL are different than the quarter and semifinal matches. Instead of having one bo3 match with the winner moving on, there are a possible three matches with each being played in the bo3 format.

Game one between Kanister and Estephan began with each player having decent opening hands. Kanister drew Questing Beast early, putting pressure on Estephan and Nissa. The onslaught continued with Massacre Girl wiping the board while Kanister lived up to his reputation, emoting Estephan with “your go.”

At two life Estephan hung on, casting out Voracious Hydra and Risen Reef (with a Teferi on the battlefield). But Kanister had another Massacre Girl in hand. He then played Rankle and the game went to Kanister. As Huey Jensen mentioned during the stream, “it’s always Rankle.”

Estephan brought in her Tolsimir, Friend to Wolves in game two, hoping to turbo out with power and pressure in conjunction with mana ramp. The strategy worked and the game was over in a matter of minutes, with it all coming down to game three.

Game three started with Estephan keeping a one land opening hand, which Kanister took advantage of with Legions End. Learning his lesson from game two, Kanister attempted to wipe Estephan’s mana dorks before things got out of control again.

Questing Beast joined the go-wide army on Kanister’s side and Estephan was forced to concede—giving Kanister the first win out of the best-of-three matches in the finals.

Game one kicked off with Kanister being short on lands while Estephan started off early with Nissa, Who Shakes the World. The game was over quickly and Estephan took the win.

The second game didn’t start off well for either player, with Estephan taking a mulligan down to five and Kanister to six with one land (and a Once Upon a Time). Game two went as quick as game one did, but this time Kanister overpowered Estephan for the win.

With each player at 1-1 for the match, Kanister started off strong with two Innkeepers and Questing Beast against Estephan’s Oko. No matter what she played, though, Kanister had an answer. Pulling ahead of Jessica thanks to the two Innkeepers, Kanister kept applying the pressure while breaking down Estephan’s defenses.

The win earned Kanister a day-one bye to Mythic Championship VII and increased his chances to qualify for Magic: The Gathering Worlds.