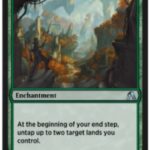 Magic Arena is revisiting some of the strongest banned cards from the past two years in the Mirror, Mirror event on July 3 to 6.

Historic is a digital format found exclusively on Magic Arena. This event is the game’s first experiment with nerfing cards that were previously banned in the format. These changes are only for the event and won’t be implemented in Historic going forward.

The no-cost event is all-access, meaning every card in Magic Arena can be used regardless of whether it’s in your collection. These rebalanced cards have the Arena logo before their names and as the set symbol.

For players looking to import decklists, put “A-” before the nerfed card’s name.

Here’s every change in the Mirror, Mirror event.

Wizards of the Coast doesn’t have plans right now to bring nerfs and buffs to Arena. There are several events in Arena that take advantage of the digital nature of the game, like Omniscience Draft. This is the first time the game will have direct nerfs as a part of an event.