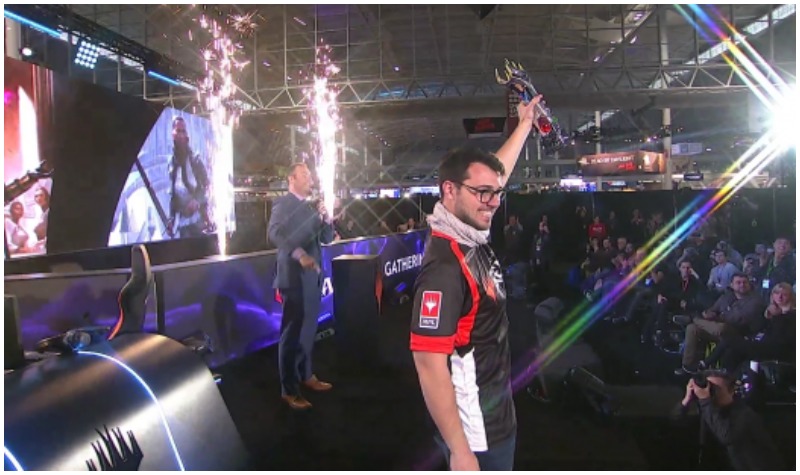 An error during the registration portion of the THB Booster Draft at Magic World Championship XXVI cost Andrea Mengucci a game, the player revealed last night.

The paper Draft portion of Theros: Beyond Death Booster Draft took place yesterday at Magic World Championship XXVI but will air today at 1pm CT. Mengucci registered his cards from the Draft to be uploaded into MTG Arena for competitive match play when it was discovered that he wrote in a wrong card on accident.

Mengucci fully admits that the error falls on him, but that doesn’t take away from the fact that he’ll start the largest tournament of the year down one game.

“I just received a Game Loss because I registered a wrong card from my Draft,” Mengucci said. “It kinda stings because I acknowledged it in the checking process after decklists were handed. But as the Latin says: ‘Dura Lex, Sed Lex’. #MTGWorlds 0-0-1.”

The penalty assigned to Mengucci still seems harsh considering competitive gameplay doesn’t begin until today. The MTG tournament rules say that a player may receive a game loss if the decklist is altered after play has started.

“Decklists are used to ensure that decks are not altered in the course of a tournament,” MTG tournament rules read. “Judges and other tournament officials should be vigilant about reminding players before the tournament begins of the importance of submitting a legal decklist, and playing with a legal deck. A player normally receives a Game Loss if their decklist is altered after tournament play has begun.”

A head judge can waive the penalty if “what the player wrote on their decklist is obvious and unambiguous, even if not entirely accurate,” according to the tournament rules.

A couple of top Magic streamers spoke out regarding the infraction on Twitter. Noxious called it a “dumb call” and Crokeyz said it’s an “archaic pointless rule.”

All matches are being played on MTG Arena, including Booster Draft rounds. Coverage of Magic World Championship XXVI begins today at 1pm CT and is supposed to include prerecorded footage of the draft from yesterday.