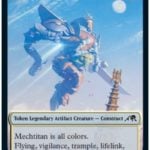 Tapping into Artifact and Vehicle tribal themes within the upcoming MTG Standard-legal set Kamigawa: Neon Dynasty (NEO), Mechtitan Core transforms into the ultimate Mechtitan, a Construct Artifact creature token that is all five Magic colors and has a total of five keywords. Previewed by Tempo streamer CalebdMTG, the Artifact Vehicle is a solid addition to the Commander and Brawl formats. It also has the potential to become a bomb within NEO Limited Draft.

Packed with value, Mechttian can hit the battlefield early as a two-drop Artifact Vehicle with somewhat decent 2/4 stats and a low crew cost of two. During games that run long, it becomes a finisher and win-con via exiling itself and four other Artifact creatures and/or Vehicles to become a 10/10 with powerful keywords like Flying, Trample, Haste.

Should it fail to end a game upon mechanizing, keywords like Vigilance and Lifelink will drastically improve a player’s board state and advantage within an MTG match. And as an added bonus, when the Mechtitan perishes, it returns the four exiled Artifact creatures and/or Vehicles to the battlefield. 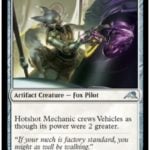 The Limited archetype UW Vehicles has the potential to pop off with recent NEO spoilers that support Mechtitan Core. The Artifact creature and fox pilot Hotshot Mechanic slots into the exile requirements to form Mechtitan and reduces the cost of crewing a Vehicle during the early game stages. And Artifact Vehicles like Prodigy’s Prototype can provide alternative win conditions without Mechtitan Core.

Players can test out the Mechtitan Core within the NEO Limited format and other Magic formats like Commander and Brawl with the global release of Kamigawa: Neon Dynasty on Feb. 18. A digital launch is scheduled to take place on Feb. 10.