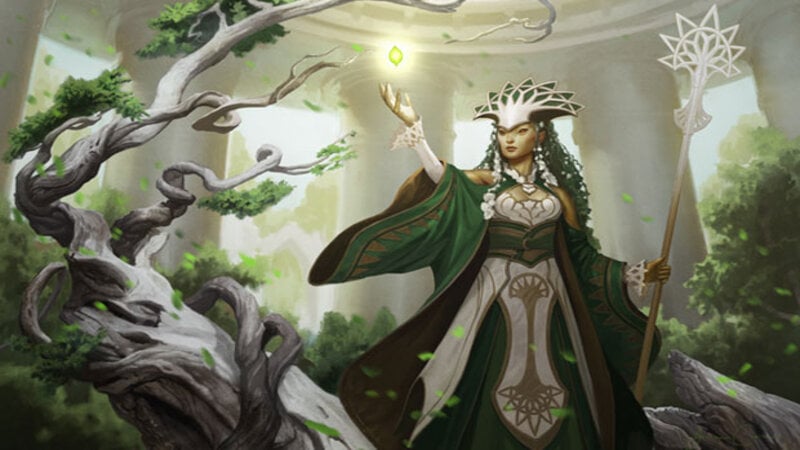 With the last 100 Common and Uncommon spoiler cards dropping for Magic: The Gathering Core Set 2020, the M20 enchantment Gauntlets of Light creates an infinite mana combo with Leyline of Abundance and Incubation Druid.

All of the spoilers in Core Set 2020 are complete, bringing new combos and metagame changes to the various Magic: The Gathering formats. One such combo involves the enchantment Gauntlets of Light (M20) being placed on Incubation Druid (Ravnica Allegience), along with a Leyline of Abundance (M20) on the battlefield.

Costing three mana (one white) to cast, Gauntlets of Light is an enchantment that provides a creature with a plus zero/plus two counter. Its main ability allows that creature to assign combat power equal to its toughness rather than its power.

Gauntlets of Light also has a mana cost ability (two colorless and one white) that untaps the enchanted creature. When placed on Incubation Druid, tapping it produces three mana of any type of land that the player controls once a plus one/plus one counter is placed on it (Adapt, Leyline of Abundance’s mana ability, or another source). In conjunction with Leyline of Abundance, every time a creature is tapped, it creates one green mana.

This creates a total of four mana, with the untap ability only costing three. It also forms an infinite loop, allowing a player to obtain any amount of white for green mana they need.

Get ready to rock Green Stompy or Selesnya tokens with Magic: The Gathering Core Set 2020 on July 12. You could also sign up for MTG Arena and start producing infinite mana with M20 on July 2.