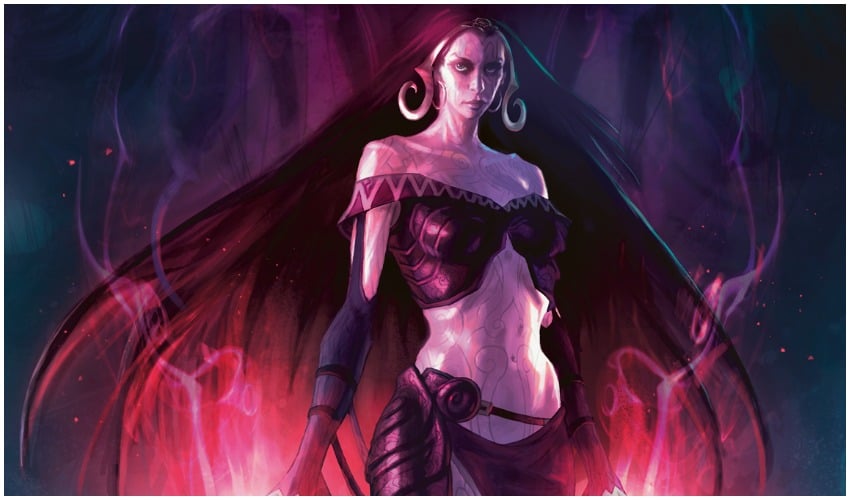 Liliana has switched sides in the MTG War of the Spark expansion, and her new sorcery card might break the game. Set to release at the end of April, it’s the war to end all wars on Ravnica. Filled with over 30 planeswalkers, Eternal-Gods, and a host of powerful spells—War of the Spark will shake up decks in formats like Commander, EDH, and even Standard.

Liliana obtained the artifact Chain Veil from the catacombs of Shandalar, giving her untold power without killing her. Command the Dreadhorde shows Liliana wearing the ancient artifact as she takes control of Bolas’ army.

Costing six mana (two black), Command the Dreadhorde is a sorcery spell able to bring creatures and planeswalkers back from the grave. “Choose any number of target creatures and/or planeswalkers in your graveyards. Command the Dreadhorde deals damage to you equal to the converted mana cost of those cards. Put them into the battlefield under your control.”

Six mana to bring back creatures and planeswalkers from the graveyard is a bargain, even if doing damage to you. But with the War of the Spark planeswalker The Wanderer, all damage will be prevented. Making Liliana Command the Dreadhorde a very broken card in Standard. EDH will benefit from it given the typical amounts of lifegain and Commander has plenty of “prevent damage” cards similar to The Wanderer.

Grabbing planeswalkers from the graveyard is a big deal too, especially in an expansion containing over 30 of them. This doesn’t include all the other existing planeswalkers in Standard, or even Modern.

Magic: The Gathering War of the Spark is almost here. It’ll release early on MTG Arena April 25 and the official pre-release is April 27.