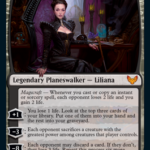 Liliana Vess is coming back in MTG’s Strixhaven: School of Mages as a professor who’s trying to settle down after a rough past and teach the next generation of talented mages.

The new instructor simply goes by Professor Onyx. While the students of Strixhaven don’t know her true identity, Magic players will recognize the character who recently was a key player in the War of the Spark storyline. With a type line of Legendary Planeswalker – Liliana, Professor Onyx is a unique style of Planeswalker whose name is different from the character that’s showcased on the card.

The six-mana Planeswalker is reminiscent of the War of the Spark iteration of Liliana but has a significantly different gameplan. While the last version of Liliana took advantage of creatures dying, Professor Onyx wants players to cast a slew of Instants and Sorceries.

Professor Onyx comes with the new mechanic Magecraft, which gives players additional benefits when an Instant or Sorcery is cast or copied. The rest of the Planeswalker abilities help find more spells with a solid minus-three ability that acts as removal.

Liliana’s story is fleshed out on Confront the Past, a Black Sorcery that features a new mechanic in Lesson/Learn. Gideon Jura sacrificed his life to save Liliana during the final battle in War of the Spark. Despite finding refuge in a teaching gig at Strixhaven, Liliana is still processing her survivor’s guilt. Confront the Past can be fetched from the sideboard after casting a Lesson spell.

Confront the Past is a decent piece of Planeswalker recursion and removal. It’s a good, situational card that fits into sideboards as a one-of spell. Since Lesson spells can be grabbed from the sideboard, this makes Confront the Past playable with a low deck-building cost.

The Strixhaven: School of Mages set will launch digitally on April 15 with a tabletop release scheduled for April 23.