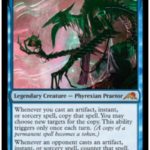 The Phyrexian praetors, once thought to be defeated, are slowly reweaving themselves back into the Magic: The Gathering narrative.

Kamigawa: Neon Dynasty is a major piece of the ongoing story, revealing the identity of The Wanderer and reintroducing Jin-Gitaxias, the blue-aligned Phyrexian praetor.

The original Jin-Gitaxias from New Phyrexia is a powerful spell played primarily as a finisher in reanimator decks in eternal formats.

Neon Dynasty brings players a new Jin-Gitaxias that’s difficult to kill and terrifying once it hits the battlefield.

The second ability is absurd. This shuts down most removal that opponents would have. This requires the opponent to double spell in a turn to remove Jin-Gitaxias.

It doesn’t exactly attack the opponent’s hand like the old Jin-Gitaxias, but in a way, it does. It forces opponents to use more spells from their hands to break through the second ability.

Once Jin-Gitaxias resolves, copying a spell each turn should close out the game quickly. Free copy effects like the first ability will quickly overwhelm an opponent.

Jin-Gitaxias invades Magic when Neon Dynasty releases on Magic Arena and Magic Online on Feb. 10. The full tabletop release is on Feb. 18.