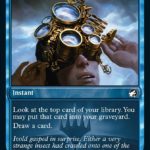 Standard rotation is coming with the release of Innistrad: Midnight Hunt in September with the removal of four sets from the format.

Throne of Eldraine, Ikoria, Lair of Behemoths, Theros: Beyond Death, and Core Set 2021 will rotate out of Standard on Sept. 24 when Innistrad is released. Innistrad will join Zendikar Rising, Kaldheim, Adventures in the Forgotten Realms, Strixhaven: School of Mages as Standard-legal sets.

The sets rotating out are some of the strongest in Magic’s history with the most banned cards. Despite all the bans, these sets still feature many format staples that will be leaving. Innistrad fills an important role as the first set of rotation. Today’s Weekly MTG stream revealed three cards from Innistrad intended to be format staples. These Commons and Uncommons fill important roles in decks as efficient removal and card draw.

Infernal Grasp is a solid two-mana unconditional removal spell that will replace Heartless Act and Eliminate in many decks. The drawback to this cheap spell is losing two life on resolution. For many decks, removing a threat is worth a two-life investment. Some slow decks may want to use Power Word Kill instead because even two life could be the difference between victory and defeat.

This Instant is Shock with upside. Shock is a strong card in Limited and will always see play in Standard. The upside of getting to scry one when it hits a player is relevant and presents interesting decisions. This card also may suggest burn will be a relevant archetype soon.

In the Weekly MTG stream it was confirmed Surveil won’t make an appearance in Innistrad as a keyword. Consider has a non-keyword instance of Surveil with the first ability. This replaces Opt as the one-mana draw spell. Generally Surveil is better than scry due to the myriad ways decks interact with graveyards.