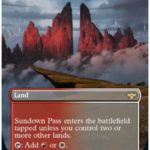 Innistrad: Crimson Vow will complete the cycle of two-color “hunt” lands that were introduced in Innistrad: Midnight Hunt.

Magic: The Gathering’s next set will introduce the enemy color pairs for the lands that enter the battlefield tapped unless you control two or more other lands.

These lands have shown up in every Magic format thanks to their strong color fixing and minimal setup cost. They’re strong budget options for players not willing to shell out the cash for shock lands or fetch lands in eternal formats.

The five lands being introduced in Crimson Vow are:

These lands join pathways, snarls, campuses, and snow duals as two-color options. There’s a chance that the completion of the hunt land cycle will render snarls obsolete in Standard. It all depends on how important it is to have immediate access to both colors in the first two turns.

Grab a playset of these lands when Crimson Vow is released on Magic Arena and Magic Online on Nov. 11. A worldwide tabletop release is scheduled for Nov. 19.