When Oko reigned supreme over MTG Standard, one card stood out as a potential contender: Fires of Invention. This powerful card allowed for wild value plays and lots of action, with several harsh restrictions. But Oko was broken and Fires couldn’t even break into the top-eight.

Now, Fires has another chance to make an impact and it seems to have settled on a spicy Jeskai brew to heat things up.

Ultimately, this deck needs to hit Fires or plays like a dud. Fires enables all the synergy and combo potential contained in this list, so you need to make sure you can get to it as fast as possible. That means running four copies of it.

To give yourself extra chances to draw it, double down on deck digging with Shimmer of Possibility and Drawn from Dreams, which let you fly through your deck to assemble Fires and its payoffs.

Jeskai Fires also unlocks the potential of a card that’s seen almost no Standard play at all: Sphinx of Foresight. A 4/4 flyer for four that lets you scry each turn is sweet, but this card gets even better if you have it in your opening hand. Scrying three to start the game can really set you up for success.

Survive with board wipes and tempo plays

Fires plays much like a combo deck, so you’ll need ways to slow down aggressive creature decks. And Jeskai colors give you lots of tools to do just that. Deafening Clarion is the main enabler here, wiping out every small creature on the board for a discount. Time Wipe provides for a fifth board wipe if needed.

Follow up a board wipe with tempo plays. Teferi, Time Raveler is a great play here, setting your opponent back and restricting them to playing only during their main phases. Bonecrusher Giant joins Teferi in this category. Stomp on something your opponent cares about, then throw down Giant as a powerhouse blocker.

Cavaliers are the payoff

Fires is a powerful deck that can throw down a lot of threats quickly, but nothing beats it when it gets to its Cavaliers. 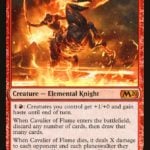 Cavalier of Flame is really what this deck is built around. It’s a 6/5 that lets you reshape your hand, has a safety valve, and its activated ability gives you an immediate win condition.

The nature of this deck is that you’ll have some creatures on the board just by playing it—creatures like Sphinx of Possibility and Bonecrusher Giant. Casting Cavalier of Flame with Fires of Invention leaves you at least two (and likely more) activations, turning all those creatures into lethal threats.

Meanwhile, Cavalier of Gales does more of what you want. It holds well against other creatures but also helps you blast through your deck.

Activated abilities are the key

The key to understanding this deck is that by playing cards with Fires, you leave all your mana open for activated abilities, which, importantly, are also the only interaction you can have with the game during your opponent’s turn due to Fires.

So it should come as no surprise that Kenrith, the Returned King is the final addition to this deck. It plays a similar role as Cavalier of Flame in that it allows for hasty attacks. But it can also help you draw cards or gain life, especially if you play it using Fires. Just remember you don’t have access to green or black mana for its other two abilities.

Jeskai Fires is a fun deck that can pull off some of the biggest plays in Standard right now. A recent 6-0 finish at Twitch Rivals shows that the deck has chops in the new meta, so go out and ignite your opponents.