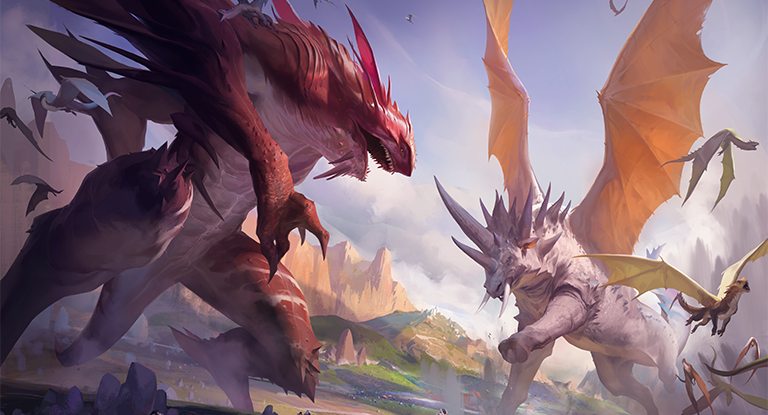 Well, it’s official—Magic Arena is allowing you to draft against other players.

Up until now, you’ve probably been smashing it up, getting all the best picks by drafting around the game’s draft bots. The Magic Arena draft experience is about to seriously level up, so it’s time to step your game up as well.

Here’s everything you need to know about drafting against other players.

A lot of things remain similar when drafting against other humans and against other bots. That means general draft strategies that have worked well in the past will continue to work well moving forward.

Have a good balance between threats and answers

You’ll always need some way to win, so draft threats: cards like Archon of Sun’s Grace, Clackbridge Troll, or Drakuseth, Maw of Flames. The best threats are ones that don’t need any further help to close out the game.

Of course, your opponent will have a few of these as well, so you’ll need answers to their threats. Flexibility is key here since threats come in all types of different cards—that’s why Bedevil is harder to cast than Cruel Cut.

Have a good balance between creatures, non-creatures, and lands

This balance, in general, should be 16-7-17 if you’re aiming for a 40-card deck. Reasons to vary from this curve include cutting a land if you have mostly low-cost spells, cutting creatures if your deck benefits more from instants and sorceries, or cutting non-creatures if your creatures have non-creature-like effects. Avian Oddity, for example, is functionally a three mana instant that gives another creature a flying counter and draws you a card when you cycle it.

Have a good curve of mana costs

Each turn, you can play by default one land. So while high-cost spells are usually more powerful, low-cost spells are necessary to get in damage early or at least to prevent your opponent from getting in the early beats.

In general, you want an even bell curve with your mana costs, centered around two and three, like so:

Of course, depending on the deck you play, you may want to shift your deck down in cost (for going aggro and attacking early) or up in cost (for late-game strategies).

Do your research and become familiar with different sets’ draft themes and synergies. Sets are designed specifically to reward people that follow these. One recent example is Core Set 2020‘s Elementals theme, which gave many elemental creatures bonuses when played alongside others. In cases like these, draft cards higher if they go along with synergies on cards you’ve already drafted.

But what about drafting against other players?

“Rare drafting” is a thing

The cards you draft in Arena (outside phantom events) are yours to keep. That means players are drafting for more than just the games ahead and may even draft cards that are completely useless to them simply because they can use those cards in other formats. And that might totally be the correct decision for them. But it can definitely throw your draft off if you don’t consider the possibility.

How to read signals

This leads us directly into the second and hands-down most important part of drafting against other players: signals. Simply put, signals are taking what’s missing from a pack and turning it into knowledge about what other players are doing.

Let’s start with an example. You’re passed the following pack after your first pick in a Throne of Eldraine draft:

Stormfist Crusader is a decent rare—it’s cheap, aggressive, and can give you quite a few cards if unchecked. But the player to your side took a different card. What could it be?

First, note the two uncommons. Each unopened pack almost always has three, so the player definitely took an uncommon. Secondly, note the color balance. Wizards tries to make sure that packs are relatively balanced around the five colors. This pack has only one green card, but two red and white cards—though one of the reds is our gold rare, which Wizards weighs less. So I’d guess that the missing uncommon is green or red.

Now is where your set knowledge comes into play. What are the top Throne of Eldraine uncommons worth taking pack one, pick one? My guess would be something like Slaying Fire or Keeper of Fables. Both are strong by themselves but also have upside if you can draft them in certain kinds of decks.

Of course, determining what card is missing is only half the battle. If you get passed a top green card and see a lack of red in the following pack, then it’s likely they’re in red, or vice versa. This reading basically goes on for the rest of the game.

Reading signals ultimately relies on your knowledge of several things including top-rated commons and uncommons, the Limited meta, and other synergies. This skill requires a lot of practice and study—some players consider it just as hard as playing the actual game, especially when you do it right.

Why reading signals is important

The payoff for reading signals, however, is huge. The players passing you cards are all making decisions that affect what cards you’ll be able to make your deck with. If you’re sharing a color or archetype with them, you’ll be fighting all draft long over the same cards and likely passing a ton of value down the line to another player.

Now, in Arena, you won’t likely be playing against your fellow drafters (so “hate drafting” won’t be a thing), but you will have to live with the deck you draft. And other players are much, much better at drafting than Arena bots—if you leave value on the table, they’ll grab it right up. They’ll also adjust much faster to the meta, so don’t sleep if you see a card that you’ve heard is undervalued. The odds it makes its way around the table are slim.

Properly reading the table can leave you in a great position to have a top draft deck. The players around you simply won’t be interested in the cards you need, leaving you with good picks all draft long. You may even get some pack three or four rares. It’s all about setting yourself up for success.