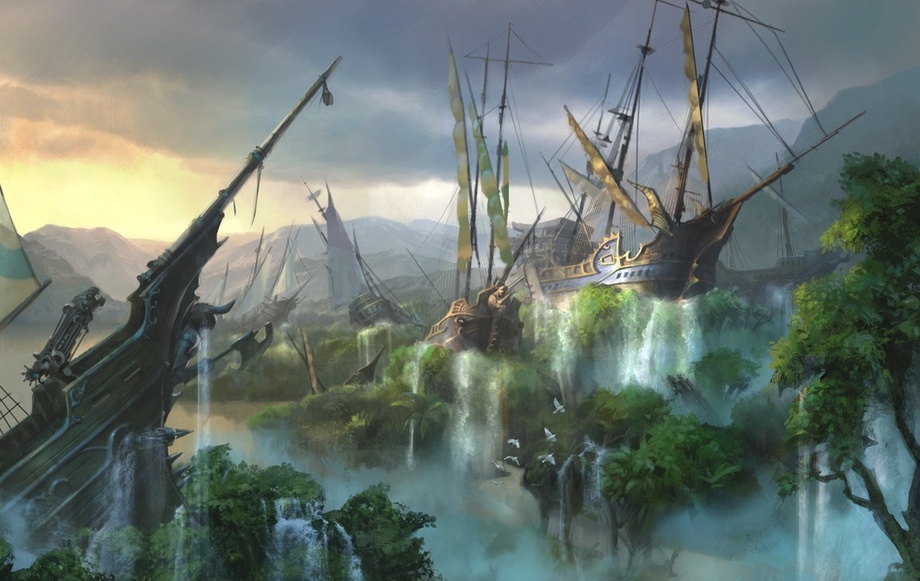 Magic: The Gathering‘s Standard format got a rude awakening last weekend when one card managed to take over the most recent Grand Prix event: Scapeshift.

On the surface, that card is… weird. Sacrifice your own lands and then just get some more? You probably have questions, so here’s everything you need to know about Scapeshift.

Why is Scapeshift so powerful?

Scapeshift isn’t powerful… by itself. The key to unlocking this card’s power lies in specific combos that use multiple lands entering the battlefield. Magic‘s landfall mechanic is the clearest enabler.

Using Scapeshift, a creature like Steppe Lynx can go from very small to extremely big, immediately. Landfall is so common that you can also use it to make a ton of creatures, deck your opponent, deal a ton of damage, kill a bunch of things, or just get really fat and swing for lethal.

But all that is just regular Magic things that most decks can do. Scapeshift is capable of much more.

Scapeshift is a Modern format archetype

Scapeshift is so powerful that some decks in the Modern format (i.e. decks that can use any card starting from 2003) dedicate themselves to it. These decks are commonly just called Scapeshift and almost always feature the same win condition.

Enter Valakut. To be honest, before Valakut, Scapeshift just wasn’t a good Magic card. But when combined, the two cards are an instant kill if used correctly.

The basic combo is simple: Ramp up to seven lands, cast Scapeshift and sacrifice all your lands, bring in Valakut and six mountains, and deal 18 damage for an instant kill.

Most Modern Scapeshift decks do have some redundancy, using cards like Primeval Titan as alternates to Scapeshift. Make no mistake, though, Scapeshift is the key combo card. If it’s successfully resolved, it almost certainly means game over.

Why is Scapeshift back in Standard?

Scapeshift was reprinted last year in Core Set 2019, but it didn’t instantly find a home in Standard. There simply weren’t any good combo cards for Scapeshift to enable. Enter Field of the Dead.

Printed in Core Set 2020, Field of the Dead is similar to Valakut, even if it’s a little slow. Instead of blowing your face up with Mountain-fueled lightning bolts, Field lets Scapeshift spew out dozens of zombies. Without an immediate answer, Standard Scapeshifters can attack for an easy victory the following turn.

This combo was overlooked during spoiler season and has finally come to prominence. Luis Scott-Vargas’ (LSV) zombie victory at MagicFest Denver was paired with no less than seven other Scapeshift decks in the top 16, all running the same basic combo. It’s hard not to notice Scapeshift and Field of the Dead as Magic‘s new hotness when it makes up 50 percent of the field.

How does LSV’s Scapeshift deck work?

The deck itself is relatively easy to understand.

Ramp spells form the core of the first few turns, with creatures like Arboreal Grazer and Elvish Rejuvenator backed by Growth Spiral, Circuitous Route, and Grow from the Ashes.

Of course, the land is important too. Four copies of Field of the Dead are backed by many singletons or twin copies of various dual lands that serve to diversify (and meet Field’s requirements) and still give access to all three colors of mana. Blast Zone and Memorial to Genius serve as some of the deck’s only card advantage and removal, while Prison Realm makes up the only direct removal in the pile.

Then there’s Scapeshift—four copies for maximum landscapery and combo power.

The deck’s only other cards are versatile threats to keep opponents on their toes. Hydroid Krasis is just pure card advantage and a safety valve against aggro decks, while Teferi, Time Raveler shuts off one of Scapeshift’s biggest enemies: the counterspell.

In the sideboard, cards like Deputy of Detention and Ixalan’s Binding serve to add removal options, while Ripjaw Raptor and Dovin’s Veto help survive against aggro and control, respectively. Veil of Summer proves its worth as a versatile hate card and Crucible of Worlds is just a backup plan in case your opponent manages to wipe the board numerous times.

How long will Scapeshift enjoy the spotlight?

Unfortunately for its fans, Scapeshift’s moment in the sun is likely already on its way out for two major reasons.

The first is obvious. With a 50-percent showing at MagicFest Denver, players running decks other than Scapeshift are now officially on notice to plan to play against it. Almost any board wipe can clear out those zombie pests, leaving the Scapeshifter in an uphill climb.

Sweepers for Field exist in almost every color, too. White has Cleansing Nova, Black has Ritual of Soot, Blue has River’s Rebuke, and Red has Flame Sweep. And there are at least as many similar or dual-color versions of those spells floating around Standard as well.

The second reason for Scapeshifts limited clock, however, is even more inevitable: set rotation. In the fall, Core Set 2019 will rotate out of Standard, meaning Scapeshift will no longer be legal in Standard decks. The lesson here? Get your plows in now before this zombie plan gets laid to rest for real.