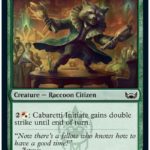 A cycle of five Magic: The Gathering creatures in the Streets of New Capenna set have hybrid activated abilities viable in a number of Limited archetypes.

Initiates within the Streets of New Capenna (SNC) set are a cycle of five Common-rarity low-cost creatures that have a hybrid activation cost. The activated abilities vary in cost and power levels that don’t specifically synergize with any of the New Capenna archetypes. Each of the SNC Initiates is a mono-color creature and the hybrid cost are in enemy colors, as opposed to the allied colored theme found throughout the New Capenna set.

The Initiates can provide additional flexibility and value to a Limited build. None of them are bombs. But depending on the colors you are leaning into when drafting, players could prioritize some of these SNC Initiates higher than others.

Here are the five Initiates and their value within the New Capenna Limited Draft and Sealed formats.

With a hybrid mana cost ability of 2(R/W), the Cabaretti Initiate is a potential solid one-drop New Capenna draft pick. Activating the raccoon’s ability gives them Double Strike until the end of the turn. Counters can increase the Raccoon Citizen’s power, allowing the one-drop to stay viable past the early-game stage.

Obscura Initiate is a three-drop in Blue with 2/2 baseline stats and the MTG keyword Flying. A three-drop two-power creature with flying is fine, but not great. The bird citizen has a hybrid activated mana ability of 1(W/B) providing Lifelink until the end of the turn. Within the New Capenna Limited meta, Obscura Initiate has the potential to swing a match in your favor.

Gaining Deathtouch via its activated hybrid ability of 1(BG), Riveteers Initiate slots right into aggressive builds. The Viashino Citizen is only a 2/2, but it can trade with a potentially larger creature and apply pressure when attacking with a wide board state.

The MTG colors Blue and Black have graveyard synergies within the New Capenna Limited meta. Maestros Initiate fuels those graveyard synergies via its activated hybrid ability of 4(UR) but it falls short of being a good card in Draft. A 3/1 as a three-drop is below average and the Human Citizen’s activated ability cost is expensive, making it a one-of-ability during the late stages of the game when you want to be spending mana on better options.

Likely the worst SNC card in the Initiate cycle, Brokers Initiate is an 0/4 one-drop. Players can pay its activated hybrid ability cost of 4(GU) to transform it into a 5/5 until the end of the turn. Five mana for a 5/5 is vanilla, and won’t do much to turn a New Capenna Limited game in your favor.