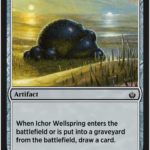 Historic is set for another big shake-up after the influx of cards from the Mystical Archive with the release of Historic Anthology V. Dot Esports has four exclusive preview cards to show off, including another piece of the set’s command cycle.

Ichor Wellspring, Urabrask the Hidden, Silumgar’s Command, and Reverse Engineer will be included in the 25-card set scheduled for release on May 27. The Historic Anthology series is a curated set of cards from Magic that are printed directly into Historic, Magic Arena‘s eternal format.

Historic Anthology V will be available as a bundle in the game’s shop for 4,000 gems or 25,000 gold. Players can also spend wildcards to get individual cards for their decks.

Ichor Wellspring is a solid card that fits into Artifact-based sacrifice strategies. This two-mana artifact could find a home in Artifact decks that center around Emery, Lurker of the Loch.

Reverse Engineer expands on the Artifact theme in Historic Anthology V. Use the Improvise ability to cast this spell for two mana. This plays well with Thopter decks that can take advantage of both mana rocks and Improvise to generate a lot of mana.

The command cycle, which was recently expanded upon in Strixhaven: School of Mages, are powerful spells because of their flexibility. Modal spells are able to adapt to any situation, making them excellent cards for the main deck. Silumgar’s Command is a conditional counterspell with three removal abilities. This should fit into the many Dimir and Grixis control decks in Historic.

Big Red decks in Historic could have a lot of fun with Urabrask the Hidden. This Mythic Rare Praetor gives your creatures Haste and makes it harder for your opponent to establish defenses. The five-drop spot in Big Red is stacked and Urabrask the Hidden adds another strong option.