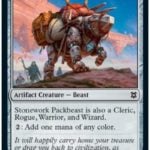 Players can use the new Magic: The Gathering Party mechanic in Zendikar Rising with the help of three multiclass creatures.

Similar to the Zendikar ally tribal, the Party mechanic in ZNR provides an added buff via an adventure theme. To form a Party and get the most out of the mechanic, a player must use and play with four creature types in a build: rogue, cleric, wizard, and warrior. But not every color and class in ZNR has an equal distribution of these creature types, which is where the multiclass vertical cycle cards come into play.

There are a total of three multiclass creature cards in ZNR that can fill any position within the Party you’re forming: Tajuru Paragon, Veteran Adventurer, and Stonework Packbeast. Two of these cards are green and the other is a colorless Artifact creature.

“Every color but green gets a primary, secondary, and tertiary class,” head designer Mark Rosewater said, in which “green is tertiary in all four colors and absent in none.”

Here’s a breakdown provided by Rosewater of the Party mechanic per color:

Tajuru Paragon, Veteran Adventurer, and Stonework Packbeast help fill in these holes so players can get the most out of their Party.

Tajuru Paragon comes with an added mechanic of Kicker in addition to her being a multiclass creature in ZNR. Her base cost is cheap at 1(G) and her 3/2 stats are solid for Limited play. When the Kicker cost is paid, she reveals the top six cards of your library, allowing you to put a card that shares a creature type with it from among them into your hand.

Veteran adventurer isn’t a great card outside of the Party mechanic, with a CMC of 5(G) for 5/5 and Vigilance. But with a Party, his casting cost is reduced by one for each creature in your Party. This means that Veteran Adventurer can be cast for as little as 2(G), which is a great card in ZNR Limited.

Stonework Packbeast is unique in that it’s an Artifact that can slide into any archetype and assist in maximizing the value of a Party. But it does have a weak defensive stat of one, allowing opponents to easily remove it from the battlefield. Stonework Packbeast also comes with the added ability to add one mana of any color by tapping two mana, an ideal ability to use in the Commander and Limited formats.

Players can compete in ZNR Limited via MTG Arena starting on Sept. 17 and via prerelease where it’s offered from Sept. 18 to 24.