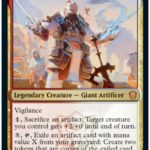 A total of five professors at Strixhaven University were revealed by Wizards of the Coast today for the Commander 2021 set, which is scheduled to release in April.

Strixhaven University is located on the plane of Arcavios, showcasing its five colleges within the upcoming Standard-legal set Strixhaven: School of Mages (STX) and Commander 2021 (C21) set. The five colleges are represented by two mana colors that are at odds with one another. Professors at each of Strixhaven’s colleges are also the C21 Legendary face cards for the five preconstructed decks.

From an esteemed magical orchestra maestro to Dryad Druid who prefers the hermit life, here are the five Strixhaven professors and C21 face cards.

Osgir, the Reconstructor is a professor at Lorehold College representing the Magic colors Red and White. Teaching about past military artifacts and weapons, Osgir is a Giant with Vigilance.

Zaffai, Thunder Conductor teaches at the Prismari College and is a maestro of the Arcane orchestra. Representing the Magic colors Blue and Red, the Legendary Human Shaman uses the new STX mechanic Magecraft. Players gain a bonus from Magecraft when they cast an Instant or Sorcery spell. Zaffai’s bonus is unique in that it can either create a 4/4 Elemental token or deal 10 damage to a random opponent under specific circumstances.

Professor Breena, the Demagogue can help you master both halves of the Magic colors White and Black within the school of Silverquill. Able to empower and disempower through the use of words, Breena is a Bird Warlock with Flying.

The Kenrith twins aren’t the only unique siblings attending Strixhaven University. The adjunct professors Adrix and Nev, Twincasters teach magical math at Quandrix College. The Merfolk twins also contain another new STX mechanic, Ward. Upon paying a cost to activate Ward, the controller of the Legendary Merfolk can counter an opponent’s spell or ability.

The five professors at Strixhaven University will become available via MTG Commander 2021, which is scheduled to be released on April 23. The five Commander preconstructed decks are Silverquill Statement (WB), Prismari Performance (UR), Witherbloom Witchcraft (BG), Lorehold Legacies (WR), and Quantum Quandrix (UG).

Images via Wizards of the Coast, Magic: The Gathering.