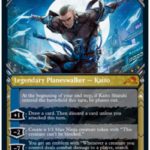 A total of three Magic: The Gathering creatures and full-art basic lands for each color dropped early via the Weekly MTG stream for the upcoming Kamigawa: Neon Dynasty set.

Scheduled to release in February, MTG returns to the plane of Kamigawa via Neon Dynasty, showcasing a cyber-punk world in conflict with old traditions. Official spoilers for the new Standard-legal set will begin on Jan. 27, in conjunction with the cards previewed early via the Weekly MTG stream. Kaito Shizuki, a new Magic planeswalker, was revealed—along with Hidetsugu, Devouring Chaos, Atsushi, the Blazing Sky, alternative art, and full-art basic lands.

Introduced via MTG web fiction, Kaito Shizuki is a three-drop new planeswalker in the colors Blue and Black. The Magic type ninja returns via Kaito’s minus-two ability and showcases his own form of ninja elusiveness by phasing out at the beginning of your end step the turn he entered the battlefield.

There are a total of four Hidetsugu, Devouring Chaos cards in the colors yellow, blue, red, and green. The yellow neon ink is slated to get offered as a promo card at WPN local game stores. The other three will appear in collector booster packs on very rare occasions, with blue showing up the most and red the least.

Atsushi, the Blazing Sky is a four-drop legendary dragon spirit that is a part of a new cycle within Kamigawa: Neon Dynasty in which when the creature dies, players have two options from which to choose. In the case of Atsushi, the Blazing Sky, players can create three Treasure tokens or exile the top two cards and play them until the end of their next turn. 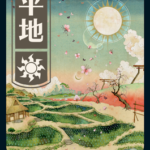 All full-art basic lands showcase stunning illustrations that capture the Japanese-inspired themes within Kamigawa: Neon Dynasty. There are two full-art versions for each basic MTG land, inspired by traditional Ukiyo-e woodblock prints, according to WotC.

The Kamigawa: Neon Dynasty set will include new and returning mechanics. It is scheduled to release digitally on Feb. 10 and globally on Feb. 18.