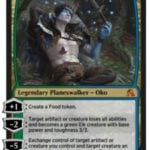 Players will have full access to digitally nerfed MTG Arena cards for the Mirror, Mirror Historic event, giving people the chance to once again play cards like Fires of Invention, Nexus of Fate, and Oko, Thief of Crowns.

Scheduled to take place from July 3 to 6, the Mirror, Mirror Historic event will contain a total of 12 rebalanced digital cards. In an effort to take advantage of Magic as a digital game, Wizards of the Coast is experimenting with nerfing overpowered cards for the upcoming event. All 12 cards receiving a balance adjustment are banned in the Historic format. Players can use these rebalanced cards during the event and will have full access to every Historic legal card to deck build with.

Here’s every banned MTG Arena card in the Historic format receiving a balance change for the Mirror, Mirror event.

Oko, Thief of Crowns created such a mess that it was banned in Standard, Historic, Pioneer, Modern, and Legacy. Players were vocal about the planeswalker’s plus-one being a minus-two and will now have the opportunity to see it in action.

Oko, Thief of Crowns had his Food token ability changed from plus-two to plus-one, while his Elk making ability was nerfed to a minus-two.

The Rogue creature stealer Agent of Treachery is banned in Standard and Historic formats. His enter-the-battlefield ability was nerfed from any type of entry to “cast from hand.”

Banned in Standard and Historic, Fires of Invention was a staple in Five-Color decks, exploiting the free casting of spells. It was previously a four-drop but now has a 3RR CMC for the Mirror, Mirror Historic MTG Arena event.

Field of the Dead is banned in Standard, Historic, Pioneer, and Modern. The zombie token generator has been changed to a Legendary land and its horde of zombie tokens now enter the battlefield tapped.

Able to restrict spell casting on opponents, Teferi, Time Traveler returns in the Mirror, Mirror event with a mana cost of 2WU and a starting loyalty of five. The WU planeswalker is banned in MTG Historic and Pioneer formats.

Neverending turns were a nightmare with Nexus of Fate, banned in Historic and Pioneer. Instead of getting shuffled into its owner’s library, the Instant Blue spell will exile itself. Nexus of Fate still has a CMC of 5UU.

Once Upon a Time

Banned in Standard, Historic, Pioneer, and Modern, Once Upon a Time was a free casting spell that fetched a creature or land card from the top five cards of your library. For the Mirror, Mirror Arena event, if it’s the first spell, it now has a casting cost of one.

Wilderness Reclamation is banned in Standard, Historic, and Pioneer for being able to untap all lands you control at the beginning of your end step. Its ability has been changed to “untap up to two lands you control” for the MTG Arena Mirror, Mirror event.

Once a ramp creature from the depths of Giant hell, Uro, Titan of Nature’s Wrath remains banned in Modern, Standard, Historic, and Pioneer. The elder giant’s Mirror, Mirror version will have its “put a land from your hand onto the battlefield” effect removed. All other abilities, like Lifegain and card draw, are still on Uro, Titan of Nature’s Wrath for the duration of the Magic event.

Veil of Summer is a one-drop Instant that’s banned in Historic, Standard, and Pioneer. With a goal of reducing its impact, the MTG Arena balance team adjusted the Instant spell’s casting cost to 1G.

Only banned in the Historic format, Winota, Joiner of Forces lets players dig six deep into their library while putting a human creature card from among them attacking and tapped on the battlefield. The nerf for Mirror, Mirror changed the human warrior’s ability to let players look at the top four cards of their library.

The MTG Arena Mirror, Mirror Historic event will only run from July 3 to 6. All rebalanced cards, according to WotC, will have an “A” logo before their names. Exported decklists will show cards with an “A-” at the beginning of the card name. No balanced cards can be added to a player’s collection.