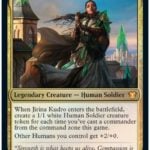 Wizards of the Coast is promoting one of its most popular formats, Commander, with five Magic: The Gathering preconstructed decks attached to the release of Ikoria: Lair of Behemoths.

Commander is a multiplayer unsanctioned format within Magic that continues to win over the hearts of players due to its versatility and gameplay experience. Players use 100-card decks that contain only one copy of each card.

Cards within each deck can only contain colors of its primary commander that’s either a Legendary creature or a Planeswalker. The preconstructed Magic decks are designed for new players seeking to join the Commander fun.

Five preconstructed Commander 2020 decks that contain 322 different cards in total are launching on May 15 with the release of IKO. The set was originally scheduled for April 16 but was postponed due to the COVID-19 pandemic. Each deck contains two commanders, a primary and secondary.

The Ruthless Regiment deck focuses on Humans and is a Mardu build that contains the colors Red, White, and Black. Its primary commander is Jirina Kudro.

Symbiotic Swarm features Kathril, Aspect Warper as its primary commander and has a Counter theme. It’s an Abzan deck in the colors White, Black, and Green.

Timeless Wisdom has a Cycling theme, a returning mechanic in IKO. Its primary commander is Gavi, Nest Warden and it’s a Jeskai build in the colors Blue, Red, and White.

Enhanced Evolution features a new Magic mechanic introduced in IKO, Mutate. The primary commander is Otrimi, the Ever-Playful and it’s a Sultai build in the colors Black, Green, and Blue.