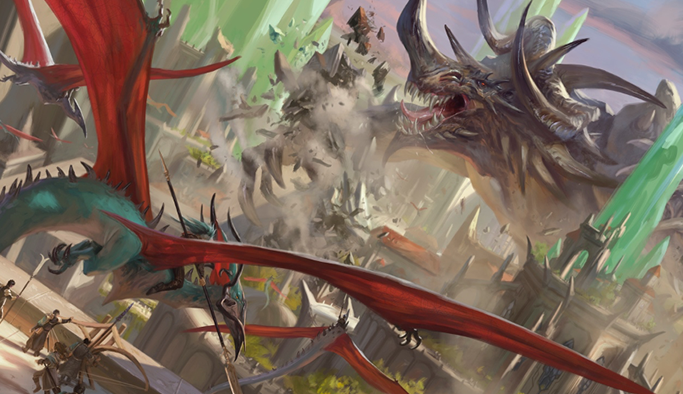 Wizards of the Coast shifted from Commander 2020 to Ikoria: Lair of Behemoths spoilers yesterday with a few Magic: The Gathering Mutate cards that stand out from the pack.

Izzet builds received some love yesterday in the IKO spoilers from Lore Drakkis, a lizard beast creature with Mutate who returns Instant and Sorcery cards from the graveyard to a player’s hand.

Lore Drakkis has the potential to be a solid Limited card and may also prove worthy in other MTG formats.

White continues to thrive off life gain with Cubwarden, a four-cost creature with Mutate that produces cat tokens with Lifelink.

Diving into the theme of eludha, a bond between humans and monsters featured within IKO lore, Exuberant Wolfbear buffs a Human’s power and toughness until the end of turn when it attacks.

Exuberant Wolfbear has potential in Selesnya builds. But even if it didn’t, it still earns a slot as a “best IKO spoiler” due to its flavor text.

Cats have taken over MTG in the new IKO set. Frondland Felidar seems like a solid card in Standard, with an ability that allows creatures with Vigilance to tap a target creature for the cost of one mana.

Fueling Izzett and Mono-Red Burn builds, Blitz of the Thunder-Raptor is a cheap-costing Instant that destroys planeswalkers.