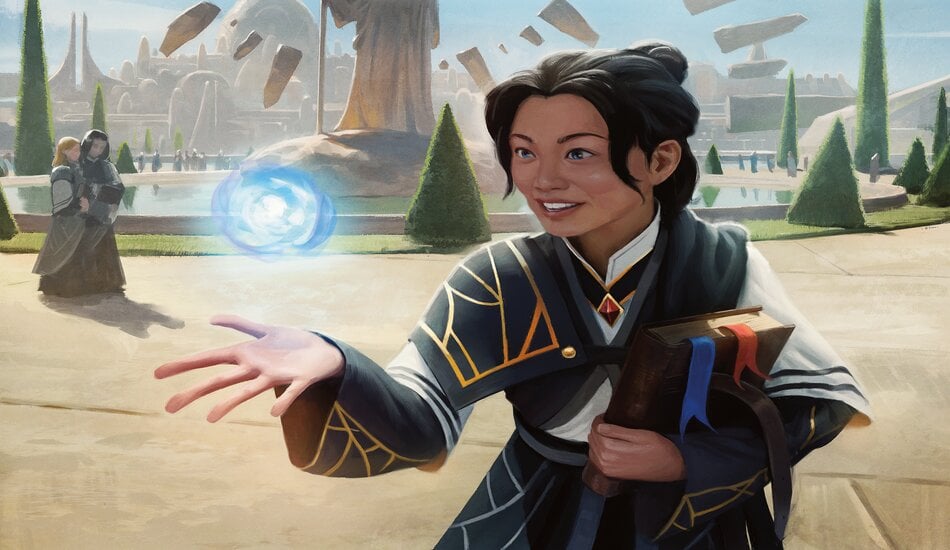 Silverquill, Prismari, Witherbloom, Lorehold, and Quandrix each have some MTG lore attached to them, and they are presented to us through Black/White, Red/Blue, Black/Green, Red/White, and Green/Blue color combos.

Each pairing has one legendary student card that is an uncommon rarity and fits with the synergies of its draft archetype.

Most of the creatures have a low mana cost, and all of them have abilities that could help you win some games in your draft or sealed events.

These students are only uncommon, not rare, so there’s a reasonable chance that you’ll be able to pick one up to pair with whatever archetype you play, assuming you commit to one early in the drafting process.

As the Silverquill legendary student, Killian is a 2/2 that costs one White mana and one Black.

Played on curve, Killian brings massive value to the two-drop slot with both Lifelink and Menace. Additionally, Killian decreases the cost of spells that you cast targeting creatures.

If he’s not accounted for early, Killian can save you a ton of mana on spells, and if you pair him with creatures that benefit from Magecraft, you’ll be able to overwhelm your opponent.

Rootha is the Prismari student and has power and toughness that give a more defensive board presence.

For two colorless mana, you can return Rootha to your hand and copy an Instant or Sorcery spell. This ability will be particularly strong when paired with creatures that have Magecraft abilities attached to them.

Dina is the Witherbloom legendary student that provides value at the two-drop slot.

Much of the Witherbloom archetype synergy is predicated around Lifegain synergies, and Dina’s triggered ability provides a payoff that will whittle down your opponent’s life total every time you gain life.

Meanwhile, Dina’s activated ability pairs well with token creation that is prominent in the set.

Quintorius is the Lorehold student, and most mana-intensive of the five legendaries, costing five mana to cast.

While his triggered ability may not seem valuable on the surface, the Red/White archetype in this set has numerous cards that involve graveyard play.

Using Quintorius with cards like Radiant Scrollwielder, Reconstruct History, and Returned Pastcaller will give you synergy that will build out your board state while getting return value off cards in your graveyard.

Zimone is the Quandrix legendary student with a cost of one Green and one Blue mana.

Her two activated abilities aren’t especially powerful, but they are exactly what you expect from Green and Blue: ramp and draw power.