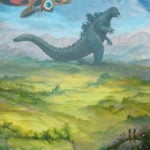 Despite mixed reviews from Magic: The Gathering players concerning the addition of Godzilla alternative-art cards within the new Ikoria: Lair of Behemoths set, five Japanese foils featuring the king of monsters will arrive on May 7 as the next Secret Lair drop.

Preorders for the foil alternative-art cards will begin at 11am CT, priced at $29.99. The purchase of the Godzilla Secret Lair drop series includes an MTG Arena code that unlocks a digital card sleeve. Several regions, however, are excluded from the Magic Arena code, such as China, Hong Kong, Macao, Taiwan, and Vietnam.

The Godzilla Secret Lair series will run for 24 hours. Customers purchasing the set can only order up to a total of 15 units. A shipping date has yet to be announced by WotC due to printing delays resulting from the COVID-19 pandemic.

Those who are interested in the MTG Godzilla Secret Lair series can purchase units here on May 7.