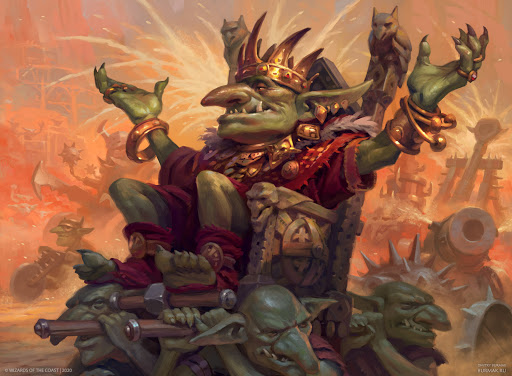 The first big Historic tournament kicks off tomorrow with the Mythic Invitational. From Sept. 10 to 13 over 100 of the best Magic players in the world will be competing across 14 swiss rounds and a top-eight bracket in Historic best-of-three play.

Historic is rapidly expanding. The current card pool is enhanced by the recent releases of Jumpstart and Amonkhet Remastered ,which brought roughly 800 new cards to the eternal format. All eyes were on the Mythic Invitational to see which decks were truly at the top.

Here is a breakdown of the 160 decks submitted for the Mythic Invitational.

It shouldn’t be a surprise that Mono-Red Goblins and Rakdos Goblins are at the top of the metagame making up 33.8 percent of the decklists. Ever since Muxus, Goblin Grandee was released in Jumpstart, it’s given the Goblin decks a massive boost in power. The Rakdos variant splashes Thoughtseize.

Sultai Midrange is another top deck that’s showing up at the Mythic Invitational with a 16.9 percent share of the metagame. Sultai Midrange leverages some of the most powerful cards in Magic in Uro, Titan of Nature’s Wrath and Nissa, Who Shakes the World to grind out value and dominate the board. Jund Sacrifice is the last deck with over 20 entries making up 13.8 percent of the metagame.

Other decks to look out for include Kethis Combo, which was one of the first decks to dominate Historic when the format was first established. Azorius Aurus is a strong Voltron strategy centered around Kor Spiritdancer. Bant Control received a powerful boardwipe in Amonkhet Remastered in Wrath of God. The deck leverages a solid ramp package with countermagic and Teferi, Hero of Dominaria to win the game.

Here are the top 10 most played cards at the Mythic Invitational.

Full decklists will be published at the beginning of round one on Sept. 10. Check out the 2020 Mythic Invitational which kicks off on Sept. 10 at 11am CT on the Magic Esports Twitch channel.