Ali Eintrazi is back with a spicy new combo brew for Magic: The Gathering.

Centered around the powerful yet often ignored Planewide Celebration from War of the Spark, Planewide Fires takes advantage of a number of new cards from Throne of Eldraine. When put together, this combo deck can fire off massive, one-turn victories that leave opponents speechless. 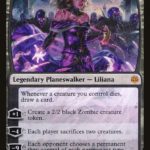 The former’s ultimate forces an opponent to sacrifice most of their permanents and often leaves them with just a single land from which to rebuild, while the latter can outright end the game. Regardless of how you get to this point in the game, setting off this combo all but shuts the door. The trick, of course, is how to get there.

Planewide Fires is slow, as most combo decks tend to be. The early game consists almost solely of Growth Spiral to ramp and Fae of Wishes and Hydroid Krasis as early blockers if needed. Beanstalk Giant and Circuitous Route provide additional ramp to help get to the powerful mid-game spells.

Fires of Invention, however, is the key enabler for this deck and primary way of stabilizing the game. If it’s cast on turn four, you basically get a free spell and two free spells every turn afterwards. Ramp helps make sure you can cast your big spells fast, and most importantly, it unlocks two key stabilizing effects.

The first is Time Wipe, a straightforward board clear that works with or without Fires. The second, however, takes total advantage of the Fires gameplan: Kenrith, the Returned King.

While Fires limits spells cast, it doesn’t limit activated abilities. It also frees up all your lands to pay for those activated abilities. So it makes sense that Kenrith, king of activated abilities, slots excellently into this deck. Pro player Autumn Burchett highlighted this interaction recently at the Mythic Championship V, where she piloted the similar Golos Fires deck to seven wins.

Kenrith and Fires get you to a good place with this deck. But winning requires getting to the combo. Fae of Wishes is the key performer here, allowing you to grab cards from your sideboard to fill in any holes.

Here are some key interactions and important tips for playing this deck.

The deck list linked in the first paragraph is from before the Field of the Dead ban. This isn’t a major loss, but you’ll have to tune the mana however you see fit. Most importantly, you’ll want to have five colors to fuel Kenrith, while still making sure to be able to cast your ramp spells and Fires.