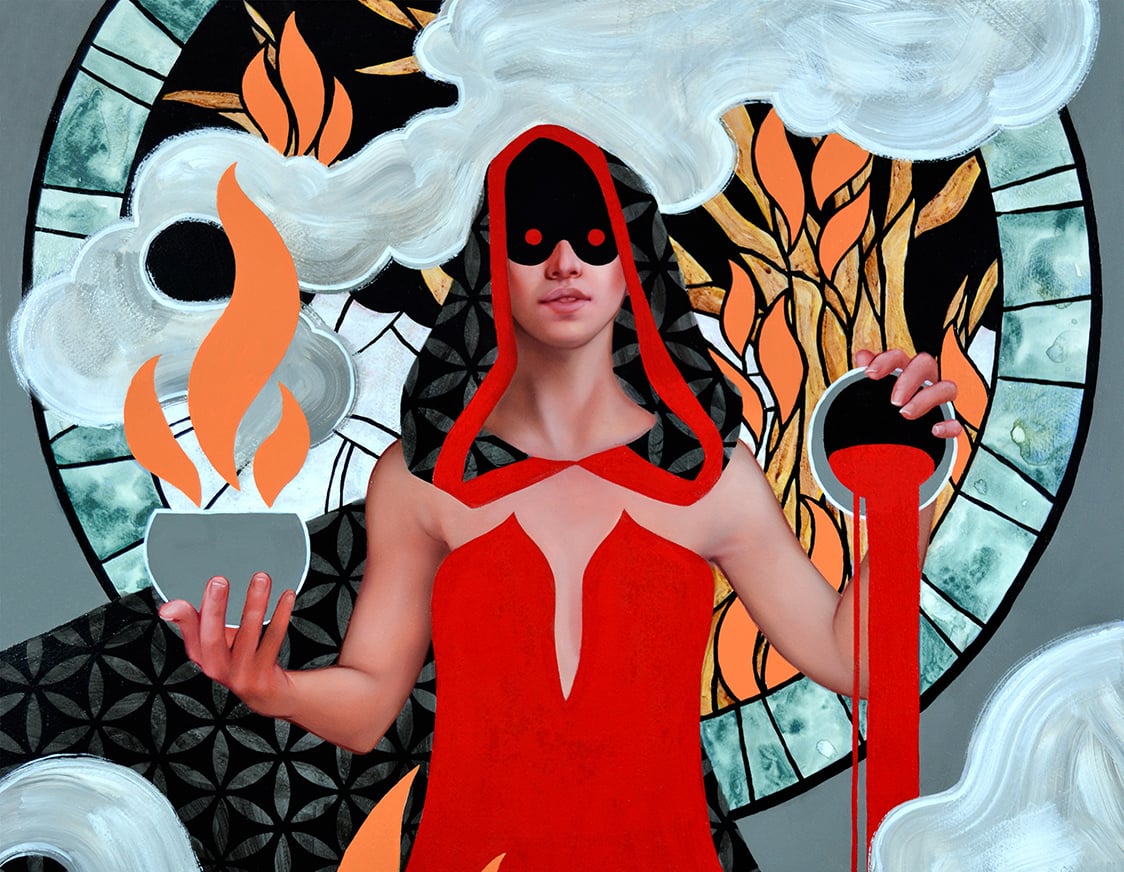 With every passing spoiler season in Magic: The Gathering, it’s not often a card sparks a philosophical conversation on what “good” art is.

But that wasn’t the case for Carly Mazur and her first commission for Wizards of the Coast. Her alternate art designs for Faithless Looting and Harmonize ended up being the predominant conversation for a week during the Strixhaven: School of Mages spoiler season, outshining many new and exciting cards from the latest set.

Faithless Looting is one of the most powerful Red cards in the history of Magic. Banned in Modern due to power concerns during Hogaak summer, the staple was reprinted into Historic through the Mystical Archive. Mazur was tasked with bringing her vision to an iconic Magic card.

The Connecticut artist’s style is different from what’s typically found on Magic art. Mazur takes advantage of dissonant artistic elements to create illustrations that look digital, despite being created on a canvas. A lot of her art, including Faithless Looting, features realistic female subjects with detailed skin and facial features. This photorealism is heavily contrasted by Mazur’s use of solid, bold colors and surrealist patterns.

While working on the painting for Faithless Looting, Mazur drew inspiration from the tarot card Temperance to help bring to life the idea of balance. When casting Faithless Looting, you must discard two cards to draw two cards. Mazur said she wanted to play off that sacrificial element to the card. She also brought a fire element into the piece and some stained glass flames in the background.

When the spoiler dropped, however, many fans hated the card. They compared the piece to a bad Microsoft Paint project, finding issues with many of the elements intrinsic to Mazur’s style, including the photorealistic subject and the use of wildly contrasting secondary elements.

“Faithless Looting dropped and all of a sudden it’s breaking Twitter,” Mazur told Dot Esports. “At first, people thought it was a fake card. Then people saw it was real and all the heavy opinions came. I know not everyone is going to be a fan of the style. I hope people warm up to it. I’m taking the criticisms to heart and will just do more work.”

But others in the community enjoyed the different take on Magic art. Many pointed to the full piece Mazur posted, which revealed the rest of the art obstructed by the card frame, showing off more of the setting and dynamic textures and brushstrokes.

For over a week players, were throwing out takes on what “good” art is and whether a piece like Mazur’s even belongs on a Magic card. Mazur said even she was unsure her style would fit with the general artistic standard Wizards set for modern Magic.

As the effort to create a more unified look takes hold, Wizards of the Coast leans more on making alternate art and frames available in main sets and supplementary products. Each set since Zendikar Rising featured alternate art variants.

Mazur’s style comes from her lifelong love of fantasy and science fiction. This interest gave Mazur an artistic direction, which put her at odds with many art professors who viewed fantasy and science fiction work as a waste of effort. Instead of focusing on a potentially more lucrative editorial route, Mazur decided to stick with expanding her own style and emulating those she admired.

“I was born from nerdy stuff and geeky stuff,” Mazur said. “It was this odd place of feeling at home in the genre, but my artwork being so different. I’m glad I stuck with it. I’d get people saying there’s no one else in the market that has what you offer. That I’m going to make that space.”

In the early years, Mazur would make use of the bold colors that are now a staple in her art out of the desire to mix up her normal classwork. Instead of detailing hair, Mazur would use one solid color, or instead of creating a long, flowing dress, she’d use distinct patterns.

This spark grew as she began learning about influential artists outside of the standard Golden Age illustrators, like abstract expressionists.

Mazur said she was told by plenty of art directors that her work was good but never fit into any ongoing projects or galleries.

“They’ve told me over the years like, ‘Man, your work is really cool. Once I find that project or once you get hired other people are going to see that and you’ll get hired for more stuff because you never know what kind of reaction it’ll get,’” Mazur said.

The door was opened after meeting with Wizards of the Coast art director Cynthia Sheppard in 2018. After a period of radio silence, Mazur was offered the opportunity. She was tasked with creating the art for Faithless Looting and Harmonize.

“I didn’t really feel like I had to compromise anywhere,” Mazur said. “All that I really had in mind was that it was going to be a full art card and to put the main focus in the top third because everything else was going to have a text box over it. It was the only limitation as far as making the compositions.”

While the reaction to Faithless Looting garnered more attention, her piece for Harmonize flew under the radar. As the less polarizing piece, it garnered mostly positive reaction from the community.

For Harmonize, Mazur depicted a woman balancing and meditating on three stones. Originally Mazur wanted her to be in more of an abstract setting with just shapes and elements strewn about. Since she had to do more of a scene, she settled on the forest setting with a tranquil color palette.

“I thought to have her balancing on one of the stones then have a forest in the background,” Mazur said. “I’d have a moon behind her and have her dress open and go down into the rest of the space. The pose she’s in is a real meditation pose and it seems so impossible, so painful, but at the same time, it’s powerful.”

Despite the community backlash, Mazur said she’s encouraged by the overwhelming support she received. She auctioned off her paintings for Harmonize and Faithless Looting and is selling signed versions of the cards. As Mazur’s artistic journey continues, she said she is open to working with Wizards of the Coast again. For Mazur, her experience working on the Mystical Archive further solidifies her artistic ideals.

“Don’t try to emulate other people or paint what you think that other people want,” she said. “Just create what you want to create and you’ll find a market for it.”