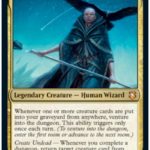 A total of four preconstructed Dungeons & Dragons: Adventures in the Forgotten Commander decks will be released in July, featuring four hero and four monster Legendary cards in each deck.

Prosper, Tome-Bound is the face hero for Planar Portal, a Red and Black deck. Prosper is a Legendary warlock who claims his power was gained from winning a bet against an unnamed supernatural being, according to senior Magic designer Gavin Verhey.

There are a total of 14 creatures, nine Sorcery, six Instant, 10 Artifacts, three Enchantments, 38 lands, and 19 other cards in the Planar Portal preconstructed AFR Commander deck.

Draconic Rage is a Red and Green deck with Vrondiss, Rage of Ancients as the hero face commander. Vrondiss is a Legendary barbarian.

Seferis of the Hidden Ways is the face commander for the three-color Dungeons of Death deck. Knowledge gained from ancient tombs and lore fuels Seferis’ powers within the White, Blue, and Black AFR commander deck.

Aura of Courage, like Dungeons of Death, is also a three-color preconstructed commander deck. Galea, Kindler of Hope, a Paladin who brings light everywhere she goes, is the face commander for the build.

There are a total of 11 creatures, three Sorcery, four Instant, 12 Artifacts, 15 Enchantments, 38 lands, and 16 other cards in the AFR Aura of Courage Commander preconstructed deck.

The global tabletop AFR release, which will include the four preconstructed Commander decks, is set for July 23.