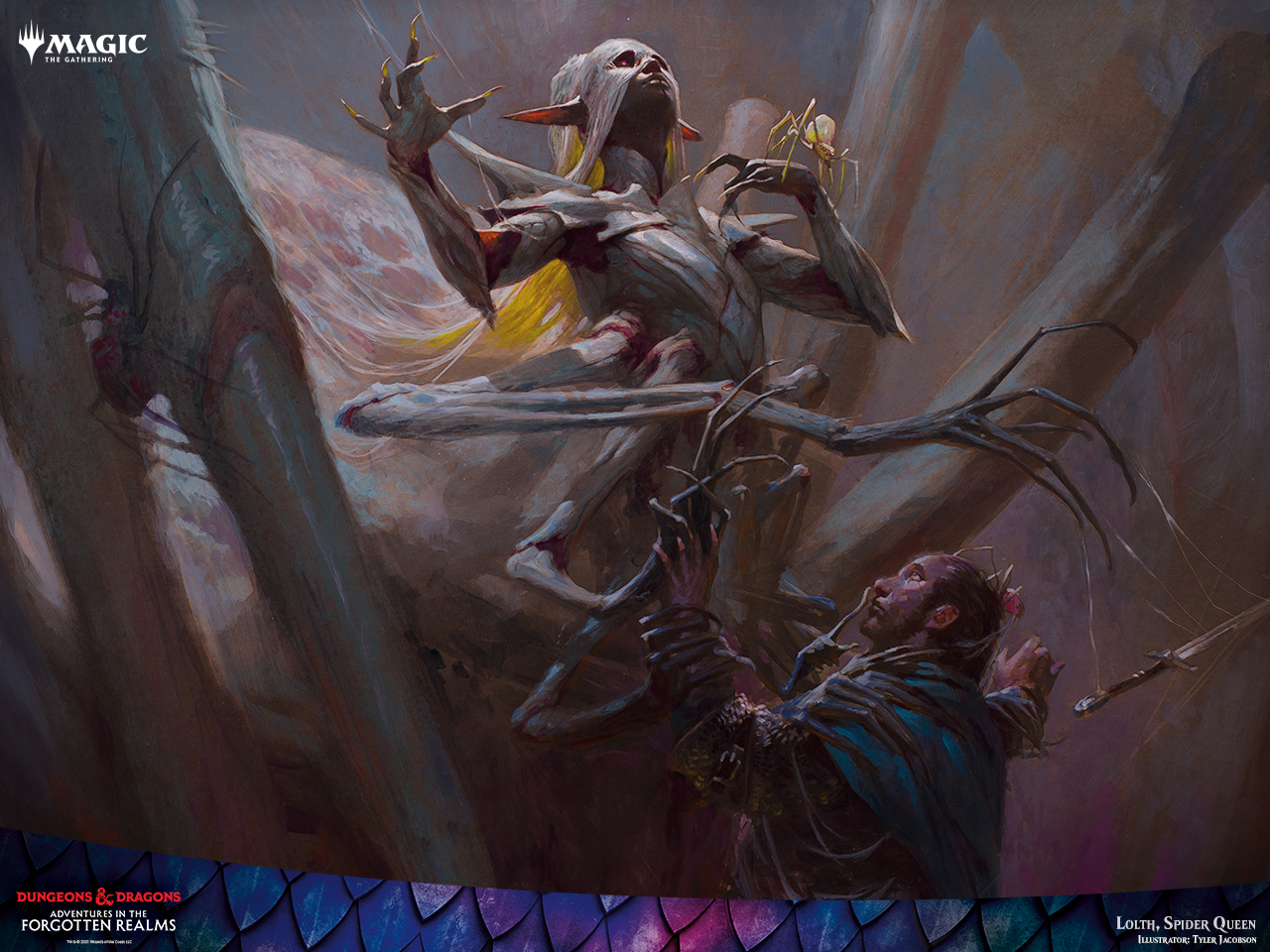 Though these planeswalkers don’t have a place in MTG lore, they each bring a new unique flavor to MTG with the ties that they each have to Forgotten Realms’ lore. If you’re a fan of D&D, you’ll probably enjoy seeing these characters put on cards and immortalized in MTG history.

Each card is mono-colored and requires two of a specific color to cast, along with between 2-4 generic mana.

Here are all five planeswalkers in MTG’s new set Dungeons & Dragons: Adventures of the Forgotten Realms.

For just four mana, the white planeswalker, Bahamut, has no ultimate ability.

Instead, this planeswalker has two abilities that tick him up by one loyalty, and once he reaches seven, he becomes a 7/7 indestructible flying dragon.

His first ability will help you prevent your opponent from attacking or impeding your progress toward ticking him up to seven loyalty, and his other ability allows you to tutor for the 1/1 one-mana creature Monk of the Open Hand.

If you run this card, you definitely want to try to get a copy or two of Monk of the Open Hand and aim to turn Bahamut into a dragon as quickly as possible.

The Blue planeswalker in this set has the highest cost of any planeswalker, costing six mana in total.

His +2 ability gives players strong card advantage, letting them draw two cards and pick one card from their hand to put at the bottom of their deck.

Meanwhile, his -2 ability can help you build your board state with Dog Illusion creatures assuming you’re close to your maximum hand-size and can’t benefit from his +2 ability.

If you’re a Blue player who dreams of having your entire deck in your hand at one time, Mordenkainen’s ultimate ability is everything you could ever want. Players facing this planeswalker will definitely want to keep an eye on Mordenkainen’s loyalty and try to prevent him from activating that -10 ability.

The Black planeswalker in this set is unique in that it doesn’t gain loyalty from its activated ability, and instead only gains loyalty when your creatures die, making her especially scary in decks that revolve around sacrificing creatures.

For no change in loyalty, Lolth lets you draw a card in exchange for one life, and her -3 ability gives you a pair of 2/1 creatures with menace and reach that can potentially be used as sacrifice fodder as well.

Lolth’s ultimate ability is a surefire way to put pressure on your opponent by making it so that any amount of combat damage turns into a net advantage of eight life lost.

For four mana, Zariel has all the flavor you’d expect from an aggressive mono-Red planeswalker.

Putting a loyalty counter on the card allows you to give a creature power and haste, and for no loyalty, you can create a 1/1 token that deals damage to any target when it dies.

The green planeswalker is the only one that has synergy with MTG’s new set specific mechanic Dungeons.

By ticking Ellywick up one loyalty, you can activate a dungeon, and by continuing to tick the planeswalker up every turn, you can move further into the dungeon.

Ellywick’s ultimate ability has the potential to be powerful, but only if you’ve completed dungeons throughout the course of the game.

If you’re looking to live the D&D life in your games of MTG, Ellywick is certainly a way to do it, but the planeswalker will likely not be especially powerful for most decks that aren’t looking to Venture.