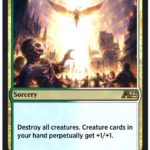 Wizards of the Coast revealed a total of 10 new MTG Arena digital-only cards today that will drop with the launch of Alchemy, a new format being added to Magic: The Gathering Arena.

Alchemy is a digital-only Standard format that will launch via MTG Arena on Dec. 9. A total of 63 new A22 digital-only cards that are legal to play in Live formats like Alchemy and Historic are being released with the new Magic format. Players can find these new MTG Arena cards in Alchemy booster packs. All A22 cards will have duplicate protection and once you own all the new cards, Arena will pull cards from the main Standard set.

In addition to the 63 new MTG Arena cards being added, a number of existing Standard cards will receive nerfs and buffs that will only show up in Live formats and not affect tabletop Magic formats. Players who already own cards that are rebalanced will own every version, including the rebalanced version, of that card. The same applies to players who unlock a rebalanced card, in that they’ll own every version (including the tabletop-legal version) of that card.

A total of three rebalanced MTG Arena cards for Live formats like Alchemy were showcased today. Other nerfs and buffs that were mentioned in the preview of the MTG Arena Alchemy format can be found here.

The legendary Artifact vehicle got a buff in that it Crews for two as opposed to the original four. The downside to Esika’s Chariot’s rebalance, though, is that it only creates one 2/2 wolf upon entering the battlefield instead of two.

Phylath, World Sculptor was buffed with the keyword Trample and the target plant also gains Trample until the end of turn upon Landfall.

Goldspan Dragon will produce fewer Treasure tokens with the text “or becomes the target of a spell” getting removed.

A total of 10 A22 digital-only cards were revealed today by WotC. The launch of Alchemy on MTG Arena will introduce a total of 63 digital-only A22 cards.

Gitrog, Horror of Zhava is a legendary frog horror four-drop with 6/6 stats and Menace. The downside to the frog is that an opponent may sacrifice a creature to tap Gitrog, Horror of Zhava and seek a land card that enters the battlefield tapped. A second ability for Gitrog gives all lands under your control the ability to be sacrificed at a cost of BG to draw a card.

Begin Anew is a four-drop Wrath at Sorcery speed that pumps all creatures in your hand with a permanent stat boost of +1/+1. Perpetually is an MTG Arena mechanic that permanently applies effects and counters.

Providing players mana advantage if they start on the draw, Forsaken Crossroads is a land in which the color is chosen upon entering the battlefield. It enters the battlefield tapped unless its controller was on the draw (went second) at the start of the game.

Geistchanneler is a two-drop 1/3 that discounts the mana cost on an Instant or Sorcery card in your hand with a mana value of three or greater by two. The discount does not apply to color mana.

Ishkanah, Broodmother is another MTG Arena card that has the draft keyword. The legendary spider is a four-drop 3/5 with Reach that pumps other spiders you control +1/+2. Ishkanah, Brooodmother also has a hybrid mana ability that allows its controller to exile two cards from their graveyard to draft a card from the Ishkanah, Broodmother’s spellbook.

Patient Zero is a two-drop 2/2 zombie with Lifelink that prevents creatures your opponent controls from removing damage during the cleanup steps.

Toralf’s Disciple has the MTG Arena mechanic Conjure, which creates digital objects. The human warrior is a three-drop 3/3 with Haste that creates four cards shuffled into your library named Lightning Bolt.