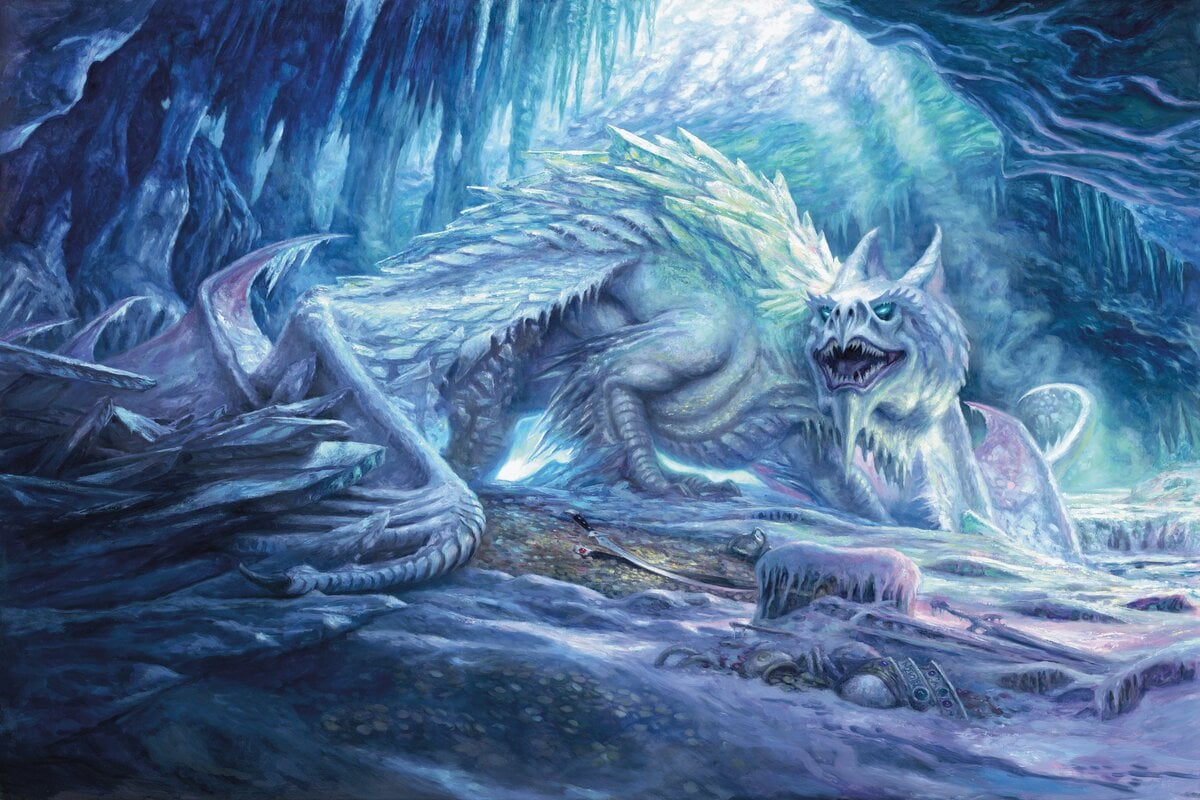 Every color is getting its own unique legendary dragon in Dungeons & Dragons: Adventure in the Forgotten Realms and the cycle of mono-colored monstrosities are all Mythic Rare quality as well.

Because of their rarity, there isn’t a high chance that you’ll see any of these during the set’s pre-release. But if you do, it’s best that you watch out for the damage and abilities that these flyers bring to the table.

This white legendary dragon comes with all of the value that you’d expect from a Mythic Rare that might see play in constructed formats.

For just four mana, the 4/3 flyer has vigilance and creates a legendary artifact when it dies.

In a limited setting, having just the 4/3 flyer with vigilance would make it a high-priority card. But giving it additional staying power after it dies puts it on another level.

Meanwhile, the “Icingdeath, Frost Tongue” artifact’s ability to tap creatures when you attack will make it a strong candidate for aggressive decks that need to swing through a stalled board state.

Having a five-mana 5/5 that flies is extremely powerful in a limited setting. And with ward, this Blue legendary dragon will be tough to remove early in matches.

Additionally, Iymrith’s triggered ability will give Blue players a valuable card advantage at the same time that they pressure their opponent with powerful five-damage attacks in the air.

Perhaps one of the more underwhelming dragons in this cycle, Ebondeath can be cast at instant speed but has the least toughness of all the legendary dragons in the set at just two.

As a four-mana flyer with five power, it will surely get some play, but entering the battlefield tapped is less than ideal.

While being able to return it from the graveyard will give you some amount of staying power late in matches, Ebondeath’s extra abilities don’t compare to those of the other Mythic Rare dragons.

Flying and haste on a 6/6 dragon is immense value for a creature costing six mana. Its activated ability that increases its power only adds to its lethality.

While its triggered ability to deal 20 damage to any target seems like it could be overwhelming, there are few chances that you’ll get to actually trigger the ability, especially in a 40-card limited deck where you’ll only be running 15 to 18 lands.

See Inferno of the Star Mounts on Amazon

The Green legendary dragon is the most expensive card in the cycle, but it has the largest body of all the cards as well. For a whopping seven mana, this Green dragon will be an oppressive 7/7 flying threat in limited matches.

Meanwhile, Old Gnawbone will have you rolling in Treasure tokens, potentially giving you the mana ramp you need to dominate end-game board states.