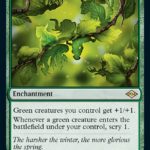 Today’s spoilers include several utility cards that won’t necessarily turn the format on its head. These cards will serve a role in various established archetypes in Historic.

Energy is largely relegated to Aetherworks Marvel decks in Historic. Longtusk Stalker is a useful new-to-Magic energy card that hints toward further energy support in the future. The key to Longtusk Stalker is that it is a consistent source of energy. It also gets larger and perpetually buffs a card in your hand.

Longtusk Stalker might not appear in Aetherworks Marvel builds, but it will be useful in various Green decks, even if it’s the only energy producer on the list.

This Creature isn’t as explosive as some other Phoenix cards, but it is an excellent late-game card that should become a lethal threat.

Elf decks in Modern are experimenting with Sylvan Anthem because of the second ability that smooths out draw steps. Scrying is important for Creature-based builds because they generally don’t have card draw spells. The anthem effect isn’t particularly relevant. It’s always good to have an extra point of attack, but that’s not the main reason to play it.