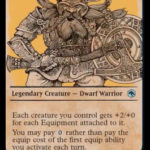 The next main expansion for Magic: The Gathering is almost two months away, but Wizards of the Coast announced a few more early previews during today’s All Things Drizzt Dungeons & Dragons stream.

Three Legendary Creatures were revealed on the stream. Each card supports a different archetype that may be supported in Dungeons & Dragons: Adventures in the Forgotten Realms. The is the first crossover set in Magic history. The set will be released digitally on July 8 with a full tabletop release on July 23.

Lolth fits nicely into sacrifice decks. This planeswalker is a strong five-mana option that enables the strategy and is a payoff. The card has draw stapled on the first ability. The -3 ability helps the Planeswalker either protect itself with two tokens or use them as sacrifice fodder. With a sufficient engine going, Lolth’s ultimate ability can be available the turn she comes in.

Five mana is a good cost for this suite of effects. Expect to see this as a top-end piece in non-Lurrus sacrifice lists.

Eventually, an Equipment-based deck will work in Standard. Wizards is laying the groundwork for the strategy to get more support with each passing set. Zendikar Rising and Kaldheim had strong Equipment themes and Bruenor indicates that Adventures in the Forgotten Realms will expand the archetype.

Bruenor buffs equipped Creatures and reduces the equip costs. A big part of what makes Equipment strategies difficult to use is the added cost to put them on Creatues. Using mana to pay for an equip cost instead of developing your battlefield can result in a bad tempo loss.

This is an interesting five-mana Creature that should see play in dedicated Creature decks. At its base, this is a 3/3 Double Strike that enters the battlefield with a 4/1 Trample Creature. This is great value for the cost. Both Creatures are dangerous threats that make this card good at parity or when behind.

The main ability of Drizzt is strange but could make this card a lethal threat in a few turns. There aren’t a lot of big creatures in Standard. This means Drizzt’s ability won’t trigger very often. If Drizzt does run into a four, five, or six power creature he can punch up with Double Strike.

The official spoiler season for Adventures in the Forgotten Realms starts on June 29.