Destiny Weaver in Theros: Beyond Death pushes Green beyond reason

The power-creep trend in Green continues. 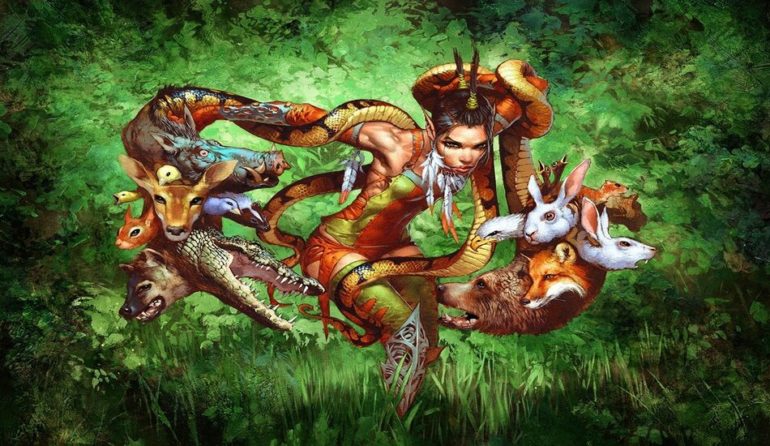 The Magic: The Gathering design team may have created the first banned Standard card of the year with Destiny Weaver—and the community isn’t happy about it.

To say that Green cards in Magic have been pushed recently in recent sets is an understatement. Three of the last four cards banned in Standard have had Green in them: Oko, Thief of Crowns, Veil of Summer, and Once Upon a Time. And it seems like the new Theros: Beyond Death (THB) spoiler, Destiny Weaver, may follow a similar path.

Destiny Weaver wasn’t previewed in English but a rough translation of the text exists.

Destiny Weaver has shocked the Magic community due to it costing only two mana, being an Uncommon, having a defense of three, triggering Constellation, and having an upside mana ability. It’s similar to Gaea’s Herald, Tenth Edition, a Rare that protected creatures from counterspells and was a 1/1. But Destiny Weaver is much better and its reveal has left many in the Magic community frustrated over the preferential treatment Green seems to get.

“Green is so pushed right now, it’s the color that basically does everything,” a Reddit user said. “The only question is what colors to splash on your green deck to make it even better?”

When compared to other THB spoilers, Destiny Weaver seems pushed to the extreme. Eidolon of Obstruction was revealed yesterday as a White two-drop that hates on planeswalkers, is a 2/1 with first strike, and is a Rare.

“Stuff like this is why players are frustrated about the state of white,” a Reddit user said. “Compare to the white Eidolon spoiled earlier today. They’re both two drops with sideboard abilities, and yet green gets the more general-purpose main-deck one, with better stats, a secondary ability, and at a lower rarity of all things.”

Destiny Weaver shuts down Control deck counterspells and pumps up already powerful archetypes running Nissa, who Shakes the World. Its mana ability has Instant speed, meaning a player can pump a 3/3 land created by Nissa after attacking.

The color Green in Magic has dominated the Standard format since the release of the Throne of Eldraine set. Even after recent bans, several archetypes with Green remained tier-one competitive decks. Destiny Weaver is a creature that’s removable, but it may be powerful enough to help Green rule the Standard format once again.