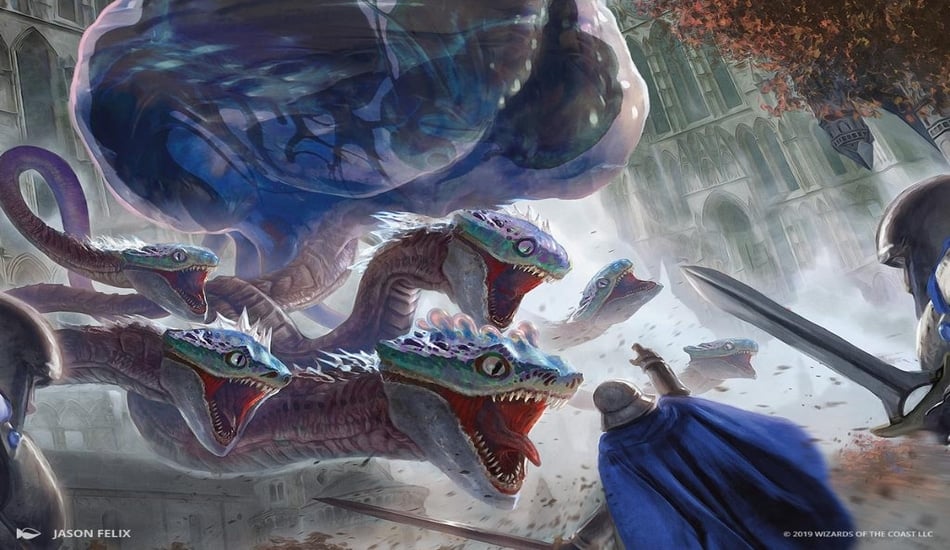 While tournament season for Core Set 2021 Standard hasn’t kicked off in full, this weekend’s Channel Fireball Pro Showdown offered Magic: The Gathering players a look into the developing metagame.

Over 300 players competed in a single-elimination tournament with the chance to play against Magic Pro League player Reid Duke at the end to double their prize money. Duke faced tournament winner Wolti in the feature match and Duke’s Bant Control (Yorion) deck took out Wilti’s Jund Sacrifice list in the best-of-three series.

The top eight had a diversity of decks with Duke’s Bant Control and Wilti’s Jund Sacrifice at the top. Some of the other decks in the top eight included Mono-Green Stompy, Boros Winota, Temur Yorion Elementals, Orzhov Yorion Doom, and Temur Reclamation.

The deck breakdown isn’t significantly different than pre-Core Set 2021 Standard lists, according to statistics from Channel Fireball. Mono-Green Stompy continues to quietly put up results relative to its percentage by taking fourth and fifth place in the tournament. Here’s the breakdown.

Bant is still the color combination to beat and Duke’s list is further proof that it won’t slow down with the release of Core Set 2021. Duke ran a fairly standard Bant Control list with Growth Spiral, Uro, Titan of Natures Wrath, Teferi, Time Raveler, and Nissa, Who Shakes the World. His list did include a handful of new cards, though.

Duke ran two Jolrael, Mwonvuli Recluse in the main deck. Jolrael creates a 2/2 cat token for the second card drawn each turn. Her activated ability buffs creatures based on the number of cards in your hand. Duke ran one Cultivate to provide some additional ramp, but the deck doesn’t have much trouble with that anyway.

Wolti’s winning Jund Sacrifice decks featured new pieces for Jund Sacrifice to have fun with. Wolti ran two Solemn Simulacrum, which ramps and provides card draw. One Fungal Rebirth and two Village Rights made it into the list for card draw and graveyard recursion. Sparkhunter Masticore and Scavenging Ooze in the sideboard suggest those two cards will be sideboard staples, especially while Uro, Titan of Nature’s Wrath and Teferi, Time Raveler are still in Standard.

Zero copies of Teferi, Master of Time made it into a top-eight deck. It’s unclear whether this is because of the card’s power level or players not figuring out what shell the new planeswalker fits best in. Ladder titan Ugin, the Spirit Dragon only made it as a four-of in SpecOpGiraffe’s top eight Temur Yorion Elementals list. It’s almost a certainty, however, that Ugin will see high-level play once tournament results start rolling in.

The next large tournament for top-level professionals is the Players Tour Finals on July 25 and 26. The top eight will take place a week later on Aug. 1.