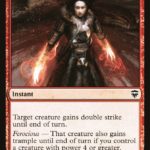 Both Historic Anthology six and Explorer Anthology one will contain 20 cards intended to shake up the formats. Each bundle will cost 4,000 gems or 25,000 gold. They will contain four copies of 20 different cards included within the bundle.

The full card list for each anthology will be revealed on July 27, but Wizards of the Coast revealed one card from each through a couple of advertisements on Twitter.

Explorer is a precursor to adding Pioneer on Arena. The format contains all Pioneer-legal cards currently on Arena. In an effort to align Explorer more closely with Pioneer, Pioneer Anthology sets will be released to bring key cards to the format.

Temur Battle Rage is a part of Explorer Anthology one. This two-mana Instant from Fate Reforged gives a Creature double strike. If you control a Creature with four or more power it also gives the target Creature trample.

It’s a powerful aggro spell often used as a finisher. The release will bring support for R/W Heroic decks. Favored Hoplite was already revealed as a part of the set. It also can easily find a home in Historic too. R/G Aggro and Mono-Red Aggro are established strategies in the format that could benefit from a combat trick like Temur Battle Rage.

Historic Anthology six will be getting Chalice of the Void. This continues Historic’s reputation as a versatile Legacy-style format that has a unique identity compared to other formats in Magic.