Here are the biggest takeaways from MTG Mythic Championship IV

Tron rules the day while Hogaak leaves its stamp on Modern. 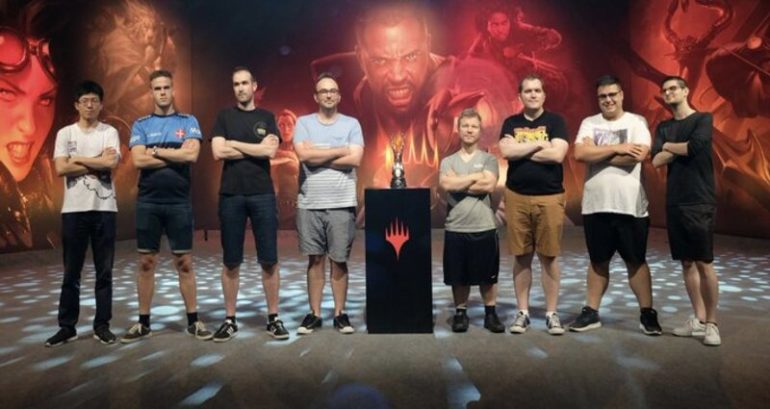 Magic: The Gathering’s fourth Mythic Championship in Barcelona was all about Modern with a hot new card, stolen deck, and Tron coming out on top.

The Modern format and WotC’s recent release of Modern Horizons was the feature at MCIV, with Draft and Constructed play on day one and two. Several big names in MTG were in the top 25 after day one, like Brian Druin-Braun (BBD) and Christian Hauck. By the end of day two, the Magic Pro League (MPL) failed to have any representation in the top eight.

Here are some of the biggest takeaways from Mythic Championship IV.

The biggest story coming out of MCIV was the use of Hogaak, Arisen Necropolis. A recent addition to MTG via Modern Horizons, Hogaak decks dominated the MCIV field. With over 500 players competing for the championship, one out of five decided to play a version of Hogaak.

Despite being the hottest deck at MCIV, only one Hogaak player (Martin Müller) made it into the top eight. Known in the MTG community for winning the 2014 World Magic Cup with the Danish national team, Müller also had two top eight finishes in 2015 and 2017.

Hogaak, Arisen Necropolis is a unique card because it takes zero mana to cast since it comes onto the battlefield through convoking and exiling cards from the graveyard to pay the casting cost. It’s an eight/eight with trample that can also be cast from a player’s graveyard.

Using cards like Stitcher’s Supplier and Satyr Wayfinder, Müller placed creatures into the graveyard quickly. In addition, he used low-cost mana creatures with alternate abilities, like Carrion Feeder and Insolent Neonate, for convoke or sacrificial purposes. Once Hogaak, Arisen Necropolis is out, it’s a hard card to stop.

The biggest threats to a Hogaak deck come from cards like Leyline of the Void and Rest in Peace. Since both cards are usually a given in a player’s sideboard due to the current meta, it’s surprising that Hogaak performed as well as it did during MCIV.

Theft of deck at MCIV

Müller was cruising toward being a top eight contender, but shortly before round 12, his bag and Hogaak deck were stolen.

This isn’t the first occurrence of a bag being stolen at an MTG tournament. From Grand Prix up to Mythic Championship events, theft takes place. During the Grand Prix in Japan this season, several backpacks were reportedly stolen, resulting in players having to withdraw from the tournament.

For Müller, this wasn’t the end of his MCIV run. His friends came together to help, replacing the cards in the Hogaak deck he brought and entered.

Severin defeated David Mines (Jund) in the quarterfinals and Zhiyang Zhang (Jund) in the semifinals. The matchup between Severin and Torres seemed to be in Torres’ favor. Tron tends to be a bad matchup against Hardened Scales due to it lacking the disruption needed to take out cards like Arcbound Ravager and Inkmoth Nexus.

Tron came through for Severin as he quickly polished off Torres in the first two matches. Game three went to Torres, who looked to be in trouble after taking a mulligan down to five, but it was all decided in match four.

With Severin at one life point, he top-decked a second Urza’s Tower and cast Ulamog, the Ceaseless Hunger to exile Torres’ Nexus and a land. Leaving Torres vulnerable, he was unable to invoke the final point of damage and the MTG Mythic Championship IV went to Severin.

Viewership on Twitch for MTG Mythic Championship IV was significantly less than MCIII, which has been the case with Mythic Championships that are tabletop instead of digital (MTG Arena). MCIII had a peak viewership of over 120,000, according to Esports Charts, while MCIV was lucky to break 20,000.

WotC did improve the quality of the stream for tabletop by adding player face cams in addition to the over-top view of the match. Decklists were also submitted before the tournament began so viewers could pull up a player’s deck during a match to view the cards in greater detail.

Even with these improvements to the stream, though, the casual MTG audience skipped out on watching MCIV. Part of this is due to it being in the Modern format. Most casual players stick with Standard and maybe venture out into Commander.

There isn’t anything wrong with Modern, it’s simply hard to follow for a general audience who doesn’t typically play MTG in that format.

Overall, MCIV in Barcelona was a success. Fans got to see a new archetype emerge in the meta, along with outstanding play all weekend long. Despite the lower views on Twitch, it’s good that WotC continues to promote competitive tabletop MTG tournaments, especially since Grand Prix events are rarely covered via livestream.

The next MTG Mythic Championship will take place from Oct. 18 to 20 and will be featured on MTG Arena instead of competitive tabletop.