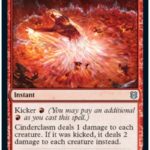 Magic: The Gathering fans will be able to utilize the best Kicker synergies from Zendikar Rising in Limited and Constructed when the set releases on Sept. 17 via MTG Arena.

Last seen in Dominaria, the Kicker ability has been around in MTG since the Invasion block. Kicker is a straightforward ability that has the potential to add a decent amount of value to already playable cards in Constructed and Limited formats. It can be found on Sorcery cards like Reclaim the Wastes, allowing a player to search for two basic lands as opposed to one when it’s Kicked.

Kicker will also appear on creatures like Moss-Pit Skeleton, adding three +1/+1 counters to the plant skeletons stats when its Kicker cost is paid upon casing. It can even add value to Artifact spells like Skyclave Relic, creating two tapped tokens that are copies of Skyclave Relic when it’s Kicked.

From Common to Mythic Rare, here are the best ZNR Kicker cards in Constructed and Limited.

Similar to Flame Sweep, Cinderclasm will deal two damage to each creature on the battlefield when its single Red mana cost is paid for Kicker, in addition to its normal CMC of 1(R). The Instant is somewhat narrow in Limited but a great card to have in sideboard when playing Constructed against Aggro archetypes.

Bloodchief’s Thirst is a solid MTG Black card on its own, and is able to destroy a target creature or planeswalker with a converted mana cost of two or less for a single Black mana cost. When the Sorcery spell is Kicked, it will destroy any target creature or planeswalker, no matter what its converted mana cost is. Players can utilize Bloodchief’s Thirst at any point of a match thanks to its Kicker cost, making it a solid pick in Limited and a main deck worthy Sorcery in Constructed.

The color Blue in ZNR is packed with good Kicker spells at all rarities, like Into the Roil, a two-drop Instant that returns a nonland permanent to its owner’s hand. When Kicked for an additional 1(U), Into the Roil also draws a card. It’s a simple Common rarity spell that can have major implications in the Limited format.

Sea Gate Stormcaller might be the best Blue Kicker spell in ZNR. By itself, the human wizard is worth main decking as she copies the next Instant or Sorcery speed spell with a converted mana cost of two or less. When she’s Kicked for an additional 4(U), Sea Gate Stormcaller copies that spell twice. Pair Sea Gate Stormcaller with Into the Roil for tempo, or Bloodchief’s Thirst to board dominance in Limited and go wild with endless possibilities in Constructed.

Roost of Drakes is a cheap Enchantment that creates a 2/2 Blue Drake creature token with flying when its controller casts a Kicked spell. Control builds with Kicker synergy can capitalize off Roost of Drakes in Limited, since its an Uncommon, and go to town by paying its own Kicker cost for an additional 2/2 flying Drake token later in a match.

Taunting Arbormage is another strong Limited Kicker spell that can work as a finisher. The elf wizard isn’t much more than a chump blocker if played on curve. But when Kicked for an additional three mana, Taunting Arbormage forces your opponent creatures to block a single target creature of yours when attacking.

Playable in just about any MTG format, Thieving Skydiver is a merfolk rogue whom many opponents will dread seeing played either on curve or later in a match. She has an “X” Kicker cost that allows her controller to gain control of a target artifact with a converted mana cost of “X” or less. And if that Artifact is an Equipment, it automatically gets attached to Thieving Skydiver. The rogue is likely a sideboard creature in Standard but should see a decent amount of gameplay in Historic.

Gaining its stats based on a player’s life total, Scourge of the Skyclaves is a fun Mythic Rare that has the potential to cause havoc in Constructed formats. The demon’s power and toughness are determined are each equal to 20 minus the highest life total amongst players. If he was Kicked for an additional 4(B), each player loses half of their life, rounded up. Scourge of the Skyclaves isn’t a creature that will see play during opening turns but can turn a match upside down during the late-game, especially in Commander