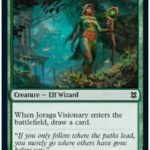 With the completion of Zendikar Rising spoilers in Magic: The Gathering, players now have an idea of the best Green cards to use when competing in Limited formats.

There are several powerful synergies that utilize Green cards within ZNR. Kicker builds are looking strong via UG while BG capitalizes on counter synergy. Pairing Green with Red provides a powerful lineup that wants to beat down your opponent, and Landfall is a strong mechanic within GW builds.

From powerful beasts with Trample to Artifact Equipments, here are the best ZNR Green Common and Uncommon cards in Limited.

There are several MTG Green cards that are Commons worth an honorable mention. Rabid Bite is a recurring reprint that’s a solid card in Limited but not a top pick. And Tajuru Blightblade is a standard 1/1 with Deathtouch that’s too susceptible to removal in ZNR but still worth grabbing if playing if building around counters. Might of Murasa is a slightly worse Giant Growth that can work as a finisher when kicked and put on a creature with Trample or an unblocked flyer. There’s also Nissa’s Zendikon and Canopy Baloth, four-drops that don’t quite stand out value-wise.

Most 3/2 four-drops are Limited filler. Joraga Visionary stands out from the pack due to her drawing a card upon entering the battlefield, a solid ability to utilize in Green. Control builds will always make use of Joraga Visionary while creature builds who aren’t worried about Party are more likely to grab a Canopy Baloth over the elf wizard.

Kazandu Stomper is a finisher with value. The beast has Trample with a 6/5 stat line. Kazandu Stomper also returns two lands to hand when entering the battlefield. This opens the door for Modal DFC’s like Khalni Ambush to return to hand, helping clear a path for Kazandu Stomper to end a match. Players can also utilize Landfall triggers via the returned lands.

Dauntless Survivor is similar to Ironshell Beetle, typically an honorable mention card. But the human warrior has value in ZNR due to having synergy with +1/+1 counter builds and triggering Party abilities. Dauntless Survivor is nothing more than a chump blocker but his ability can provide match advantage when the counter is used in conjunction with Trample creatures. His counters also synergize with cards like Gnarlid Colony, turning normal creatures into serious threats.

A majority of the Uncommon MTG Green cards are solid picks within ZNR Limited. There are cards like Vastwood Fortification, similar to Battlegrowth, a Modal DFC combat trick that places a permanent counter on creatures within GR and GW builds. There are also powerful build-around creatures like Vine Gecko and Iridescent Hornbeetle. Even Party build-around’s have a powerful weapon via Veteran Adventurer, a 5/5 with Vigilance who’s mana cost is reduced by one for every party member in play. And for players who enjoy Rabid Bite, Khalni Ambush is an upgrade.

Roiling Regrowth is similar to Harrow but with lands that come in tapped. Despite the lands entering the battlefield tapped, they trigger Landfall and provide mana fixing, making the Instant a top-pick in ZNR Limited.

Skyclave Pick-Axe might be one of the best MTG Green cards in ZNR. The Artifact Equipment is ideal in GR and GW builds and is similar to another powerful Equipment from Zendikar, Adventure Gear. Like its predecessor, it has a cost of one CMC, but in green instead of Colorless. Skyclave Pick-Axe stands out from Adventure Gear in that it attaches to a target creature upon entering the battlefield, although it’s equipped cost is more expensive.

Similar to Regrowth, Bala Get Recovery is a Modal DFC worth playing. During the early game it’s a land that comes in tapped. And later in a match, it can return one of your best cards from the graveyard to hand. The Sorcery spell has an extra mana in its cost when compared to Regrowth, but has the added value of being a Modal DFC.

Not to be confused with Murasa Brute, Murasa Sproutling is a three-drop that actually has value. The plant elemental is 3CMC for 3/3 with a 1(G) Kicker that returns a target card with a Kicker ability from the graveyard to hand. Murasa Sproutling is a solid turn-three play with a reasonable Kicker cost that synergizes nicely within a variety of Kicker builds.

Taunting Arbormage is another powerful Green Uncommon that’s ideal in Kicker builds and “gum up the board” decks. The elf wizard synergizes with Party, is a solid three-drop, and serves as a finisher when kicked. For an extra three mana of any color, Taunting Arobormage has the ability to force all of your opponent’s creatures to block a target creature.